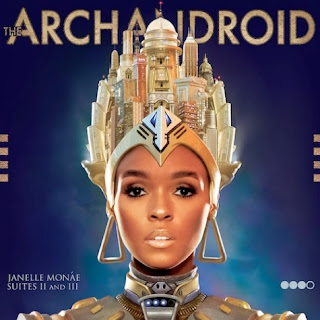 I was thinking about writing about her too - then just decided to cherry-pick, a wee bit, from Seth Colter Walls' recent Newsweek feature on said musical artist:

"...every once in a while we come across an album of such thuddingly obvious quality that writing a straight-up review seems boring. When a release is heralded by so many outlets—in print, on television, through the blogosphere—sometimes all that’s left to say is, yes, the subject under consideration really is fantastic: ho-hum, end of story..."

That is, I must say, painfully endemic to bloggers, or, rather, music writers or music journos out there turning in stuff for print, and competing with former referenced bloggers. "Faster..." as the thinly stretched, swiftly driving funk ballad of ArchAndroid goes...

This is where I'd like to embed the video for her single, "Tightrope" - but I couldn't find one to run that wouldn't subject you to a commercial... (oh, the future we live in...) - so just check out her main site to view...(here)

But, to Walls' credit, he ties in Monae's fixation and thematic album dressing born from the 1927 German expressionist film, Metropolis.

Plenty of others will already tell you about Monae - and I'm merely writing about it because I, like lots, am also listening at this moment.

But, it's timely - considering our own Detroit Institute of the Arts' Film Theatre is featuring the newly restored film (with 30 extra minutes) tonight (6/11) through June 20.