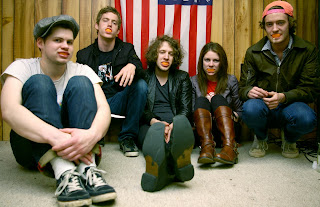 Mick Bassett’s speaking voice was often low, timorous; his eyes veiled by hanging shaggy curls. And when I’d catch him bar-side or backstage, he’d often seemed stressed. Maybe the band members were shifting around again, maybe a show didn’t go perfectly, maybe nothing was happening, or not happening fast enough. Makes him sound mysterious and melancholy, I know, but, still…you get the picture.

Last month, Bassett went to Austin and played somebody else’s songs. And, that wound up giving him more confidence and self-awareness than he’s had in all his six years of playing around Detroit. Plus, two new members joined his band, the Marthas (former Satin Peaches guitarist Ryan Wiese and Joel Sanders on bass). He was equally spurred on by drummer Eric Roosen’s knack for sound engineering and basement-set recording studio and the continued allegiance of trombonist Allison Young (of the Kickstand band) and now…

And not taking it all too seriously anymore.

“Being out on the road,” Bassett says, recalling his SXSW-aimed tour with The Hounds Below, “I saw a lot of places I’d never seen and got a lot of time to think. When you spend a lot of time in Detroit, or anywhere you may live, but, especially Detroit, for me,…being cooped up here for a few years, it’s easy to let things get out of whack in your mind. It’s easy to forget, I guess, what drives you or who you really are. In a lot of ways, I was just desperate to get out of here and I wasn’t focusing on things that mattered, but more on trying to just jump steps in terms of trying to make it to the top as fast as I could. But, in the meantime, when I went on tour, I obviously was away from my music…and playing other people’s music and listening to other bands (at SXSW), I think I learned a lot about what it takes to lead a band and what it takes to have a vision…”

Pretty revelatory so far, right? Bassett is known around here for the brass-blared, grimey-grooved, swaying ragtime jaunts through the Martha-ensemble’s interpretations of his bluesy, goth-scorched folk ballads – backed by a band that’s only maintained its drummer and trombonist throughout its nearly four years, with three guitarists and three bassists shifting through…

“…and I think my vision of my music became more clear to me. I’d wake up and I’d be writing these songs, they’d just start coming naturally. It felt real and not forced.” And he uses the word “confident.” 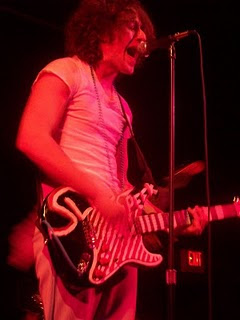 Bassett recalls, again, the stage-side research he’d conducted between Hounds sets in Austin, watching all the other bands at SXSW…bands that, to him, initially represented a bit of embodied-envy, since this, SXSW-or-something-like-it, was something he’d always hoped for the Marthas to reach.

The incorrigible cliché is that SXSW can always serve as a prognostication of the current crop of the cool – the hip – the awesome bands – the new cream of the new crop of the new style and sound and blah blah blah.

Essentially, Mick said, he walked away sort of relieved, refreshed, and believing that “I had something unique to offer,” that the Marthas coulda’ been dropped anywhere into that blurring Texas mess and been able to hold their own and turn some heads.

And that word, “confidence,” comes back; his wanting to wheel his way back to his home band, the Marthas and continue developing the sound with his newest collaborators. Wiese and Sanders came on board towards the end of 2009…guitarist Gordon Smith had moved over to the Sights and bassist Jesse Shepherd-Bates had initially wanted to develop his burgeoning JSB Squad project, but then also wound up re-joining his original band, The Satin Peaches.

In the meantime, through the month of March and April, Bassett gathered the band into Roosen’s basement and laid down four new tracks from songs he’d been writing through the winter. They combined these tunes with the reworking of a 2009 single, “Got Me Wrong” and thus, we have the Laugh Like You Want It EP.

That’s where we stand now. Bassett, himself, has been in the eye-of-the-scene since he was 18, when he and a bunch of other peach-fuzzed freshly mortarboard-flipping youths gave their all in a commendable and energetic indie-rock outfit, aptly named, the Dollfaces; thriving for a couple years in the extinguishing days of the Detroit “garage boom’s” temporary flame.

After that, he balanced the development of the Marthas with a bit of college, but a couple years ago resituated to go at music full time. Through the late 00’s, the Marthas released two EPs and a couple 7” singles.

But, this refreshed Mick and his now clear resonant incanting of finding ‘fun,’ ‘enjoyment’ and ‘entertainment’ through a less keyed up or distracted approach, now feels that this is the truest-of-true beginnings for the Marthas, “the first real statement the band has been able to make.”

For the maturing Mick, growing up on a stage with a perennial acoustic guitar slung at his shoulder (or set by his bedside each morning), he considers those first two Marthas EPs “growing pains” or, at least, “records” (in a documentary sense) “of where you were, what you were doing and the way that you grew up…” He pauses. “Not that I’m done growing at all…I’m sure I’ll feel this way two years from now, again.” And then chuckles.

“Now, I’m really encouraged…” he echoes, again with this optimism. The young man who, before, seemed like all he wanted was to get out of this city…finally got the chance with the Hounds and once he saw the other-supposedly-greener-side of the fence, concluded, “it gave me a lot of inspiration to come back to Detroit and put things together from the ground up and not skip any steps…and get the right people, get them all motivated and just make music and not worry about all the other shit in the music industry…and allow it to happen.”

He praises the recording and mixing work of Roosen, as he worked the boards to help develop Mick’s vision for these new songs and he expresses a gratefulness that the new players, Wiese and Sanders—though they’re songwriters in their own right—seem to be so dedicated to giving Mick their time and contributions.

“I think our shows,” Mick says, musing on the new rapport, “have gotten a lot more fun. People can come and dance and enjoy themselves. We’re entertainers. My job is to entertain people and I feel like I’ve gotten a lot better at that now that I’m a little more free-thinking about what I’m doing.”

“I just want people to experience it,” he says and his tone is ripe with a new purity and hopefulness that I haven’t yet heard from him.

After six years of playing in Detroit, Bassett says, “I realize that worrying about where I’m gonna go next year…” as he admits he often had, “…it just isn’t up to me. The only thing that’s up to me is writing songs and that’s all I want to do.”