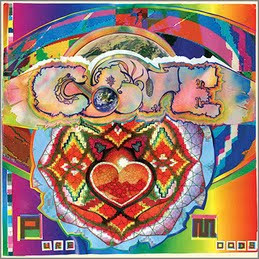 (Vinyl only release from Chicago quintet - available on Drag City).
CAVE on myspace.


Every once in a while that perfect, temporally-displaced, cloudless sun-blazed day of mad giddy freedom falls on you like the awkward sopped rush of a Gatorade keg tipped by linebackers on your turned back – and you feel renewed, re-inspired and taking pause at the modest ease with which the apparent object of your restoration came – like a steadily rising sun that just said - …here I am.

Thus, I put CAVE into my car stereo for what I knew would be a 25-minute car ride – grasping the 3-song collection as a burned CD thinking this would be a quick EP from some band I hadn’t heard of yet…turns out it was a 12” – with its three entries filling the entirety of the trip – and enhancing my whole afternoon as the sun began to set.

I was transfixed… the opening guitar jitter sounded as though the record was skipping…but after seven shaky seconds a tumbling motorik beat bursts in and it reveals itself to be a tightly wound loop acting as a surged robotic heartbeat under the flexing bass grooves, the blurped chiming synths and the surf toned lead’s melodious coos. The vocalist conjured that monotonish rustbelt yowl, not quite Great Lakes-area yokel and not quite southern twanged bark – that would, in my mind (and, exasperatingly—and repetitiously—also in the mind of many other online zine-ers and bloggers), recall a Mothersbaugh-ian delivery. Meanwhile, that beat…just kept going…and those playful, almost fuck-around noodling synths just kept dancing around the soundscape while the duel guitars continued to yammer at each other. This was, I said to myself (and would find, again, others already saying the same thing to themselves across the internet’s crop of early write ups for this) –a krautrock inspired jam!

CAN! DEVO! Even Neu and Suicide- it felt and tasted like 1983 and I was loving it! This was my sunny day! These unrelenting guitar blazes, these jogging drums, these fuzzed and howled bitty vocals, the ever-chirping synths…the pedals swirling it all up more and more the further the drums took them down this road of swelling synchronized cacophony.

“Teenager” stars with a single gurgling wavy riff that stretches and meanders for a full minute before the more psychedelic wah-whirled guitar and burly bass join in under this herked-and-jerked waltz-punctured drum. It’s exemplary of many similar post-rock, noisy fuzzed out roarers, the way it just keeps clawing and dragging deeper and deeper into the mud until it breaks through onto some rushing rock-bedded rapids off towards some gaping waterfall – the sustained guitars blur further together, the synth continues to cry out, the pedals are stomped and the drums just keep on going…

But then, as I said, exemplary of any kind of krautrock-spaced-out-jazzed-out-noise-parade worth its salt in reverie for those Faustian/Silver-Apples-ian type dissertations.

Just like any old perfect sunny day can be the simple recipe for inducing epiphany – in this world where we can already, disconcertingly, say that every band has already done every-thing and every-other-blogger has already run through their own kraut-rock incantations whilst writing about this band – I can say, simply, that what they’re laying down is, firstly—done well – and is invigorating. Like these gnarled and raucous guitars and punching-bag drums are apparently juiced with the same vitamin D of those rejuvenating sun-rays of this onsetting Summer. (Let’s not follow that metaphor much further, cuz we enter the risk of sunburns and cancer…but then, as they say, everything gives you cancer, somehow, sometimes, some-way).

Cave…Cave’s got style. They’ve got grit. Their minimalist jams have muscle. But enough said. I’d rather stop writing about it and just listen…