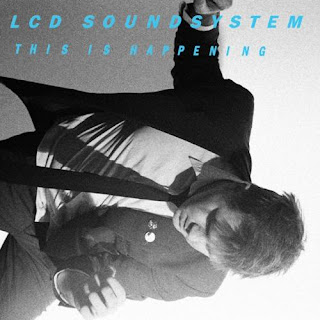 What you do is.... you work backwards:
I’ll start a band and proclaim, from the beginning, that I’m (already) “losing my edge…,” I’ll sing about the flock of “internet seekers” who will gnaw me like vultures with mouse-pad talons, I’ll sing self-referentially of the pages-long lists of bands that fire varyingly cross my songwriting synapses, I’ll sing of guitars and turntables, I’ll sing about rock kids dancing to Daft Punk, I’ll be profoundly and provocatively ridiculous and self-deprecating – and then, after extravagant and devastating live shows and two more albums, I’ll have back flipped into a kingly credibility that leaves the euro-disco-digging hipsters dropping my name as a quick n dirty reference of any sound that perfectly balances techno, krautrock, indie-electronica, dance, and synth-pop. But, see, I apparently “lost my edge” eight years ago, yet it keeps getting sharper somehow.

Call it manipulative to seemingly parody our tastes with those early lyrics (from "Edge"), or maybe chock it up to Pitchfork.com-hyperbole through the mid-00’s, still!!-we critics can’t avoid overzealous praise – at least, specifically, with LCD Soundsystem’s dabbling in trancey-Kraftwerkian-marches and infectiously dance-inducing/hand-clapped-cow-belled flare-ups; still!!....

LCD leader James Murphy’s compositions feel timeless and uncontainable because his music (backed by a septet of players) is the aural embodiment of a controlled and strategically-pop-aimed explosion of a DJ’s crate of records: “punk rock, new wave and soul, pop music, salsa, rock n roll, calypso, reggae, rhythm and blues,” –stirred and simmered in a recipe that tastes good on the dance floor, or on night drives, or even, somehow, on meditative sun-soaked coffee-sips in the kitchen of the morning-after.

Beyond techno being a more intelligent house music, LCD Soundsystem’s developing canon (particularly on 07’s Sound of Silver) converted its flock by pulling off the baffling feat of intelligentifying all myriad genres of this metaphoric “crate” of musical genres and sensibilities – it made the stupid fun of disco feel sophisticated and it embraced self-scrutiny through embracing-and-also-repudiating that same stupid fun – but, all that post modern shit makes my head hurt. Just press play.

The sound of This Is Happening seems refreshingly disconnected from the romanticized artsy gutters of New York dance clubs: the conga drums, the spacey-wind-chime synths, the cymbal sheering drum fills and the rolling guitars give it all a more cosmic/everywhere-effect. “Pow Pow” is the sleek, charming, instrumentally-eclectic sing-speak styled answer to “Losing My Edge,” but pulsed with an unabashed prog-rock theatrical mid-section. Murphy drops the arty-urban-stuffed-up-nose drawl he affected on the 2005 debut and the too-Bowie-ish-feeling delivery on some of Silver to, (continuing the trend from the poignant and poetic, dance-deifying one-two punch of “Someone Great”/”All My Friends” on Silver) allow his pleasant mid-range voice to be upfront and flex into eye-widening falsettos (“I Can Change”).

As before, when we would cock an eyebrow at the familiarity of certain movements (again, that’s the whole idea with LCD’s crate-scan), “Somebody’s Calling Me” is an enjoyable piano-plodded, finger-snapping strut that sounds like Lou Reed vacillating between Donovan’s “Mellow Yellow” and Iggy Pop’s “Nightclubbing” - Hence the fun of LCD, simultaneously stepping outside of their own art to make you beat-skippingly-aware of your own musical consciousness or of your favorite songs.

We open with the affirming “Dance Yrself Clean:” an ever-building minimalist percussion and speak-sing-ah-AHHH-sighing solemnity that steadily and rewardingly loses the battle to contain the bursting bass and weaving synth melodies – thus that the drums start booming and the harmonies howl louder – a cathartic and cardio-boosting shake up.

“Drunk Girls” is fun and bombastic (and forehead-slappingly-profound, if you listen to the words) but it can feel too much like the “Okay, here’s your single,” moment, just get your 4 minute party-starter out of the way early.

“All I Want” slides and shines with grinning Strokes-ian guitars but continually wafts in psychedelic prog-howling synths and dissonant scraping roars – dreamy into dizzy. “I Can Change” will likely be sampled into some car commercials with its affable 2/4 shimmy beat and Gary Numan-chilled synth-blips, but it’s likely, at least lyrically, the sequel to “All My Friends” in terms of this painfully relatable documentation of nightlife emotion: subtle thrills and dramas put back into perspective. “

You Wanted A Hit” sums up my LCD rant nicely; a darkly echoing electric clang wafts over a subdued beat in a computery-east-Asian feeling melody until that motorik autobahn-beat gets louder and Murphy suggests “maybe we don’t do hits.” Indeed, maybe they do something beyond that… “intelligent hits.” Admired by various music niches, yet not overexposed in the perverse-niche of the mainstream, it’s like all their songs and sound-crafting style – is the hit, the enveloping hit. Don’t over think-it though. “Honestly, you know too much, so leave us-leave us on our own…this is how we do hits.”