Getting hotter out there... I certainly hope those windows at the Majestic Cafe are open-able...cuz ther'es potential that'll get pretty crowded on Saturday, due to the "-free-" sign hung upon this show... The headline above's a play on words of sorts, referencing two bands on the bill... 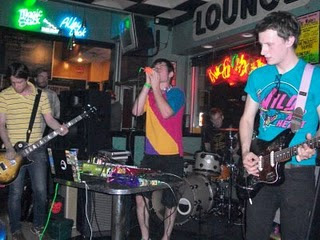 First off, we have a "reunion" of the Moondagger-era Deastro. -Deastro was the brainchild of Randy Chabot, starting about four years ago as a M83-meets-Caribou-at-a-sweet-and-naive-dream-pop-mixer, with just a laptop and a drum kit.
But when he finally bolstered it to a full band of fellow Sterling-Heights-ites, Mark Smak, Brian Connelly and Jeff Supina, the missing parts of his Voltron, he was provided the Blazing Sword needed to complete a mystical, high energy, synth-and-guitar flaring electro-rock album (Moondagger) in 2008, leading in 09...and soon into 09, they broke up.
But now they're back!...but, just for one night(?)... And they're playing for this Five Three Dial Tone Records' release show - and that...ladies n' gentlemen, is how you bury a lead. Well, maybe my lead is Deastro? But, what I had intended my lead to be, was that the pair over at Eat This City, who administer 53DT Recs, are fostering a 7" release by Dayton OH based synth-post-punkers Human Reunion. 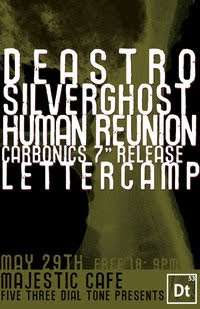 And, cassettes are cool again, in a weirdly retro way, so 53DT is unveiling their own tape series with this release.
Not only that - but freakin Silverghost is on the bill. (Bend your ears for a forthcoming LP from this tubular duo).
And...not...only...all...that, but Lettercamp is also on the bill.
And it's free.