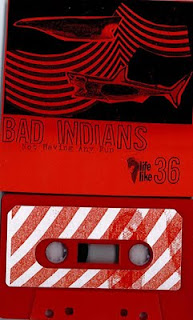 SPIN finally gets around to treating the "tape" revolution in this month's issue... (though they're about eight months-or-more late since that bell started tolling).

In it, Spin remarks upon the ostensible big boys, like SubPop, licensing cassette singles from their roster of bands, out to the little guys of basement-set magnetic tape spooled scruffy bohemians (...like, say, Fullerton CA's Burger Records). They also give shout outs to NNA Tapes, Captured Tracks, Gnome Life and Not Not Fun).


"When you devalue the physical aspect of music so much, you shouldn't be surprised when the most inexpensiev format comes back into style" - Mike Sniper, Blank Dogs, operator of Captured Tracks.

At first, it's a crazy idea...then it's a phenomenon... Then, when major labels and considerably regarded/renowned/(er, "hip") indie bands start dabbling in "it" as well..., then it's a revolution. (Oh, media sensationalism).

I don't mean to over-think this...but recorded music was seen as a novelty when it first came about a hundred-and-a-quarter-years ago - people were used to concerts. (Okay, set aside that it was the well-to-do, stuffy wig-wearing affluent's who were the ones shelling out dough for Opera halls).

But, it's funny when one puts oneself back into that mindset: What? Listen to my Mozart or my Handel at home? Through the crude crackle of this distended cylinder? Poppycock.

But, thought of another way - the recording, on some small, deluded level, could just be a substitute for the live performance... the live energy, the presence, the sweat and strain and swagger of the performer....the pulsing amplifiers reverberating your viscera... 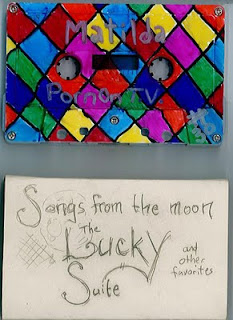 I don't intend to go too far down that road. I'm just intrigued by what the advance of generations wroughts upon debates of sound quality. When the kids are coming up from behind, yet also bringing with them the same old busted equipment and dusty technology that the Gen-X-er's thrived upon, it stirs things up in a weird and refreshing way.

As the music world shifts economically-speaking, it also shifts one's potential prospects. (Basement garage rockers have hit the hills and mined their own nuggets! Now a bunch of fledgling DIY labels have propped up as veritable olde-timey General Stores hocking their wares).

Indeed, the music world shifts and more democratic, or at least made more wild and woolly by new generations' transmogrifying outdated purist ideals (these kids don't need to worship Phil Spector, or remastered Pet Sounds, that's well and good, but they also have room for the scuzzed-out/blown-out bluster of a Ty Segall or Times New Vikings).

All I'm saying is: It's interest. And it makes me wonder if we've gotten back to that late-Edwardian-era of thinking where we revere the live performance over the recording... Or, perhaps, more so, that the recording, now, is considered supplemental, or a means for listeners to further acquiant themselves with an artist's signature and perhaps their personality - so that they have a grasp of it on their way to the concert. 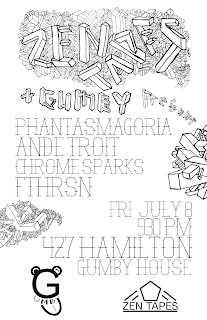 I've already overthought this more than I wanted to...
I really just wanted to give shout out's to Detroit-area purveyors of cassettes...

Ypsilanti-based Bad Indians just released a new album, Not Having Any Fun, the 36th release off of Fred Thomas' Ypsi-based LifeLike Records. (If you're over in Ypsi/Arbor, also check out Ginkgo).

In Detroit, we have Gold Tapes (run by Zac from Kommie Kilpatrick), who just put out another KK chapter, Sex Party.
There's also Aglae Tapes & Records, as well as Leroy St. Records.

Songs From The Moon went and put out their own, a split cassette with Matilda: The Lucky Suite

And then, there's CA-based Burger, who has shown plenty of Detroit love, via their push for Conspiracy of Owls' fine debut. They also have stuff by the Pizazz and Magic Jake & the Power Crystals.

How many revolutions per minute do cassette tapes roll at?