From this month's Ann Arbor Current

I’m always apprehensive about such phrases as: “new favorite (band),” but damn it all if I hadn’t said the same thing about Ypsi’s Bad Indians.

The thing is, I said that sensationally dubious phrase almost six months ago and, still, I return to the serrated shimmy and reverb-roiled tumbles and drives of their Don’t Hang That (On Me) cassette album on a regular basis. Which is heartening, firstly because it seems so many “new favorites” fail to stick-to-the-wall in the impermanence of the internet-music-world; secondly because I’ve gotten a chance to establish a reference point for their sonic sensibilities in time to dive into their next vision-quest, Sounds from the Big Room (currently available online, and at 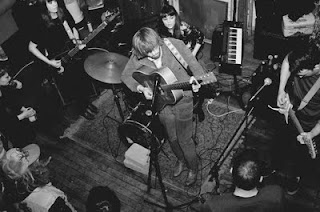 “We really aren’t a punk band,” said singer/guitarist Jules Nehring, “but I guess we’ve got some punk songs.” If anyone asks? Bad Indians are rock n’ roll. (myspace.com/badindians)

The thing is, each member, Autumn Wetli—drums/vocals, Erin Davis—bass/vocals and Ian Lannen—guitar/vocals, Morgan Morel--keys,) contributes to the songwriting process, each bringing their own approach and their own influences. Thus, their coalescing sound arches from swirling, scorched psychedelia, to spookily fuzzed-out blues, to deluges of reverb and hazy vox serenades mutating garage rock with bubble-gum pop.

One constant, thus far, has been their preferred means of recording, via their humble 4-track, often self-produced at their cramped recording space. “I’d really like to record on a reel-to-reel 4-or-8-track,” Nehring said. “It doesn’t always sound that great, but it works best for us because it isn’t any different from how we practice or play a show.”

Nehring shrugged off the gloss of big budgeted/premier productions, opting to listen to “a 4-track bedroom recording any day. I think recordings can be treated as almost-an-effect-onto-itself, to bring something new to a song. Reverb is a big part. I really like it and if we could practice or record in a cave, I would.”

The band formed, loosely, in early 2008, born from a trio of young players of whom Nehring is the only surviving-founding member. “It didn’t seem like a whole lot was going on in Ypsi or Ann Arbor at that point,” Nehring recalled, during which time the band rarely practiced and wound up eventually adding Lannen (who played in punk duo the Mahonies over in Detroit) and releasing Live from the Burial Mound. Nehring and Wetli moved to New York in 2009, where Nehring taught her drums while the band continued to write and perform. After a dizzying fluctuation of members, songs and potential trajectories, Wetli and Nehring wound up recording as a duo (the first proper cassette) and moved back to Ypsi in Halloween, 2010, having added Davis that summer.

The band have a 7” single forthcoming on Ypsi-based Ginkgo Records, as well as yet-another-cassette album on Ann Arbor-based Life Like Records.

~~ More and more, dedicated/DIY enterprises like ARBCO Records are demonstrating the feasible future of local music. ARBCO Presents is a joint-venture spurred by A2-based ARBCO Records wherein it aligns with dozens of bands under the banner of collaboratively cultivating the future of independent music through vinyl preservation.

Participating bands perform monthly (or bi-monthly) showcases raising funds (from door covers) into a collective pool to thus facilitate each other’s future pressings of respective LPs. Plus, fans benefit with an ARBCO punchcard that, after 12 punches, entitles them to a 12” vinyl record from their ARBCO Records. Arbcorecords.com/#artists. The bludgeoning metal/punk dragon-slaying quartet Blue Snaggletooth releases Dimension Thule this summer – seek it all at the next ARBCO showcase (Arbcorecords.com)