A Chat with Moonwalks (Playing This Week @UFO and @Marble) 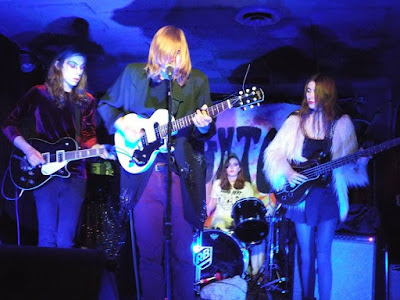 Tyler says that when the band was writing it's latest songs, The Moonwalks “…were definitely into the darker and heavier stuff.”

The Detroit based quartet recently wrapped eight vibed-out rock trips over at Space Camp in Ferndale. The tentative title of this batch is  In Light (The Scales and the Frame), but don't expect anything until the late summer or early autumn.

Tyler Grates (pictured far left, above) is the lead guitarist and main songwriter of the group, with Jake Dean on vocals/guitar, Kate Gutwald on bass and Kerrigan Pearce on drums. Grates mentions that these newer songs were mostly written in the keys of either A or E, which, specifically for his purposes, are easily flexible to the expansive and re-sculpting shifts of explorative jamming. “We want to do longer arrangements and (the newer songs) are sort of serving as the precursor for that…”

Grates mentions darker & heavier stuff… But he’s indicating that these songs were written when their listening diets, influentially speaking, consisted of stuff like Siouxsie & The Banshees, The Church and Lee Hazelwood. “Yeah, we were listening to a lot of country, actually, when we were writing last summer,” said Grates. “I mean, I don’t really see us as a ‘psych-rock’ band, per se… I might have when I first started doing it, but that was never the intent...We used to be a totally different band…’

When Grates says “…used to be…,” he’s jumping back about two years, to when the young quartet (none of them are 23 yet and one of them still can’t legally drink), first got together, straight out of high school (at Grosse Pointe South). Also, when Grates says “used to be…totally different,” he’s indicating how much tighter the group has gotten as a live performance unit. Their first batch of shows included a lot of house parties and, well, you know how sloppy those affairs can be… “Yeah, we used to just fall apart at those shows. But now? Now we can go months without meeting or jamming together and just get right back together and fall into place.”

“Well, back then…” says Pearce, “I feel like we were only doing it for fun. It’s gotten more serious and we’ve started paying more attention to what we’re doing."

“But a big part of how this band functions," says Grates, "comes from, just, our relationship as people,” said Grates.

That chemistry is coming through on a song like “Steam Train," (streaming above), or more intricate arrangements like "Sequins,"curving with a couple tricky time signatures and spiced up with some psych-tinged atmospherics from producer Eric Oppitz (of Sisters of Your Sunshine Vapor).

“Sequins” represents this band coming to that more serious juncture, where they’re “refining,” as Grates put it, or streamlining…, everything they’d initially been interested in at the outset, into a cohesive, yet lucid, kind of storm of melody and distortion. “(The songs) are sorta ‘jammy,’ I guess,” says Pearce. “But, they’re still structured at the same time.”

We’ll keep it at that: nebulous, amorphous, able to be anything (or everything at once).