Border Patrol have been crossing over the Ambassador Bridge for voluminous visits more and more frequently these last eight months. The Windsor-based folk-rock quartet are our close neighbors separated by just a handful of miles, really, and one formidable river.
Together just 18 months, if that, the acoustic-centric ensemble just put out their debut full length, Toxic Thought Machine...

You know, musicologists have found that folk music, Americana, roots, country, all those rich and rustic acoustic styles...saw mass injections of reverence and appeal the more people started moving away from the "country" and into the city. On their new album, Border Patrol want to get back to the country but find themselves cut off my semi-trucks, smoke stacks and collective scatter-brained motion. "I broke down in the city / watching people move..."

With a fine sense of arrangement, ebbing enough space into the soundscape for each of these resplendent instruments to sonorously shine, Border Patrol's crafting a charismatic-if-weary whirl of the post-everything blues, the poetry of Internet-ubiquity-ennui, the folk serenades of siren-blasted streets, to the point where a bit of insanity makes itself manifest from this brain of yours, this toxic-thought-machine... Later... "I do know / either way the wind blows / that this ain't sustainable stuff / but it's been built into me..." That's what I like most about this record, it's subtle shades of dystopia. It is country music...if the country were flung past the Great Western Industrial Park...

"A lot of the lyrics I write end up being kinda dark," admitted guitarist Dave Toennies, "But, we enjoy contrasting that in the band setting with upbeat melodies - stuff that you can dance to and get stuck in your head and maybe not fully realize what we're singing about until later. It's especially effective for some of our more political songs."

While there's no glory or romanticism in the stock-taking storytelling of the lyrics as their reveries list off surreal imagery and all-too-relatable laments, there's surplus charm and quirky personality penned into the lyrics and strummed onto the strings. Come for the twanged pronouncements, acoustic intonations and existential pondering, stay for the rock-tilt energy and dystopian soul... 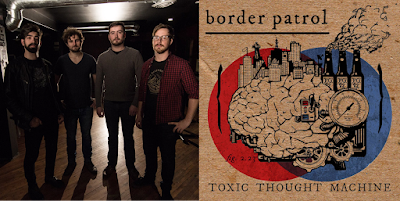 http://borderpatrolband.com/
Performing May 14th at the Elizabeth Theater at the Park Bar.