INTERVIEW with Ben Collins of Minihorse


Ben Collins is the most normal person I've encountered who is living his life entirely abnormally.

For two years, now, he's given up regular sleep schedules and taken to deep dive contemplation to excavate hidden esoterica from his cerebral crop to create the most authentic shreds of dread-pop feasibly formed from the tools at hand. Said tools are typically in his studio.

"I'm navigating life in a bit of a Fight Club-style daze," said Collins, who fronts the Ypsi-based trio Minihorse on guitar/vocals.

Even though everything he says, everything, is delivered in the calmest demeanor, the coolest of self-deprecating verve, I am imagining him as a harried, frazzled mad-scientist, bustling with cables, preamps and pedals in his apartment in downtown Ypsi at some strung-out hour of the inconceivable late-night/pre-dawn dizzy, building...building his laborato...--I mean, studio.

"I blame tape for dragging me back to the producer-role," says Collins, looking back a handful of years to when he bought a Tascam 388 reel-to-reel as he was setting up his space. "(It's) something I tried swearing off for years."

Let's get it out of the way: Ben Collins used to play guitar (and offer some backup harmonies) in celebrated Ypsi/Detroit indie-pop trio Lightning Love. He spent most of 2014 and 2015 off our hipster radars, though.

When he isn't working for UM's College of Engineering, or building iPhone Apps...he's distracting himself from focusing on his own songwriting by inviting several other bands into his home studio to record: Prude Boys, Rebel Kind, Casual Sweetheart, PONYSHOW, Bonny Doon, Stef Chura and more. He's also helping wrap up recordings with Starling Electric and The Boys Themselves. Up next: Matthew Milia (of Frontier Ruckus) is working on a solo album while 800beloved is in the midst of their final recordings as a band.


"Minihorse is the weird bedroom pop experiment that inspired this studio in the first place," said Collins. "The sound of this room is the sound of Minihorse. That project has been my main passion lately. It started from a love of the 90s power-pop revival, indebted to bands like Teenage Fanclub, Rocketship and (of course) The Lemonheads. Lately I want it to sound more like Ray Bradbury wrote songs for Lou Reed to sing at your high school prom."


Ben Collins has consistently been behind the scenes of the...well, Scene. If he isn't producing an album-while-simultaneously-eschewing-the-title-of-producer, then he's quietly running live sound for another handful of bands as an advisory engineer. (He probably won't consider himself an engineer). (He has a degree in performing arts technology, by the way). So anyway, for the sake of this article, damn it, we'll consider him a "songwriter..."

And when I mention the word "dread...," it sparks something in Collins.

"Yes, there's all this imagery going on behind the scenes (of a song like 'Glitter & Smoke'), and it's a little bit fucked-up. I don't think of that song as soft because in my head it's got dark connotations and a feeling of dread that I've been embedding in these songs, sort of on purpose. I've been surprising myself with extra layers of dread that I didn't know I had. It's not super serious...but at the same time, I don't know if 'light' is the word I'd use for these songs..."

What happened, at some point in early 2015, is that Collins, the reluctant producer, started nourishing (...boy, if that's the word we can use for it?)...nourishing his creative side and making time for his recordings by treating himself as though he were one of his own clients. Hence, we have about an EP's worth of decent Minihorse demos floating out there in the Internet's ether, while John Fossum (drums) and Christian Anderson (bass) have joined Minihorse to flesh these songs out for a small series of live appearances, most of which in Detroit. By Collins' count, they've played...maybe...nine shows.

I called Collins for this interview just as he was running over in his head, how to word a band biography for social media purposes. "I don't really have a narrative," Collins says, referring just as much to these Minihorse songs as he could be to his whole musical existence. "I mean, outside of the context of all these other artists that I've helped over these years..." Collins has been a chronic spotlight-evader. I'm surprised, frankly, I even got him to talk about himself for even 14 minutes.

With Minihorse, last year, Collins made a conscious decision to stop being a hermit. "(Minihorse) is starting to get around despite my best efforts to conceal it," Collins said. "Which is weird."

People have proclaimed to Collins these sort of sweet, sort of/almost-backhanded compliments like "I can tell you're getting better.... (at songwriting)." Collins shrugs this off and takes it as the positive encouragement that it is, quoting Miles Davis' sage appraisal: Sometimes you have to play a long time to be able to play like yourself  THAT'S THE THING, though... We haven't really gotten a chance to KNOW who Ben Collins, himself, is...

We don't know who Ben Collins is yet...

Who am I even talking to?

Remember, I said he was a normal-abnormal... 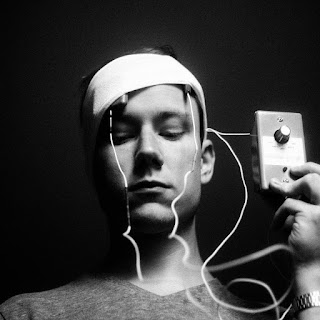 "Writing music is the hardest thing I know of," says Collins. "It feels like being a professional gambler. Occasionally you stumble into a big win, but you can’t really be sure what strange powers are at work, so you get superstitious."

Maybe this is a confidence thing? Collins won't say so. I'm glad that he does, however, have the confidence to start baring his soul a bit more through Minihorse.

"Creativity," says Collins, specifically inferring songwriting, "...isn't something you can practice, like basketball...or like: being normal. All you can really do is work to cultivate a creative mood, sit back in a trance, and be hopeful — but not too hopeful!"

So Collins told me about his efforts to gain agency over that elusive creative state, which includes meditating, supplementing, and depriving himself of sleep.

"I started taking freezing cold showers and holding my breath (see Wim Hof). Maybe strangest of all, I’ve been experimenting with transcranial direct current stimulation (tDCS), which involves directing a low current through the brain with saline-soaked electrodes. Different configurations of the anode and cathode have different effects, ranging from a generally enhanced mood to the ability to learn more deeply. I’m not sure if my songs are getting better, but I’m definitely seeing lights flash and getting a strong metallic taste in my mouth."

Verdict?
Collins cops to being a digital hoarder of his songs and assures us that "...this is the year that stops." He'll be putting out as much material as he can, and he says he's excited to start taking Minihorse more seriously. "Hey..." he says, "...that's a funny sentence."