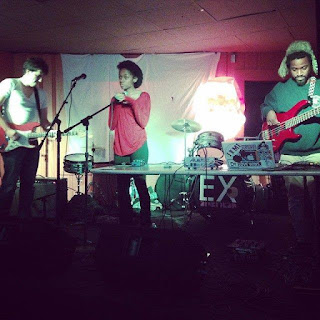 If you've already been a band for three years and your third release is the one you choose give an  eponymous title, then it's clear that this is the definitive work, a sonic commencement of sorts, the coalescing of said-band's quintessential sensibilities, vibes and motifs.

Young Punk have made an album I can listen to at almost any minute of the day. Forgive me if that sounds abstruse. But if it's the bleary break of dawn in the faint pre-sunrise glow, then this is paced perfectly for an acclimating awakening... If it's after my coffee, the day's unspooled itself a bit and I'm up a few wrungs of productivity, this is optimal ambiance to keep me focused... If I'm out of work, biking home as the skies change and the winds die down then this is propulsive and funky enough to enthuse with some slick, cinematic-feeling soundtrack for a euphoric pedal back home... If I'm getting ready to go out to the club, this is what you suit up to, what you drive-to, and what you come down with on the return cruise.

The winning attribute of Young Punk's latest album is its coolly poised sparseness; there's space to breathe, as much for each tone, timbre, vocal and beat, as there is for the listener; these tunes have a slow-onset radiance. In that sense, it feels like minimalist R&B, but there's also escapist trip-hop with dreamily-clouded production and staccato beats. Then again, the influential-webbing of guitarist Nick Van Huis and bassist/producer Stephen Stewart may strand back to the hub of hip-hop, but Stewart certainly adds a bit of funk to his basslines, while Van Huis adds some crunchy surf-guitar riffage. Vocalist Taijah Johnson's sweet serenades become a subtle cornerstone, comparably eschewing any specific style in her delivery and flexibly fitting to soul, ambient dub, R&B or trip-hop.

It could be anything. And, as I said, I could listen to it anytime... Not that I'm saying I'm obsessed with these songs; I'm just saying their the essence of that soothing-the-savage-beast aspect of music. Put it on & I can vibe with it...

Young Punk host their own monthly showcase, every first Thursday (coming up April 7) at the New Way Bar in Ferndale. They're also performing April 17th at Kelly's with Market and Philly-based Hallowed Bells.