Quite charmed this morning by Carmel Librudi's new music video...

"Big Mistake" is the lead single off of the Detroit-based singer/songwriter's forthcoming album Patron Saints of the Ordinary, her fourth CD, which will have it's release party on April 3rd at PJs Lager House. Neil Patterson (Neil P. Neebo of Downtown Brown) shot this video, and he'll be performing at said release show, along with Matt Wixson. This celebration doubles as a bittersweet going-away party for Neebo, assuring a swell of emotions...or feels...or just good vibes, all around. I mean, Patterson's taking a big step here, moving to L.A. to pursue music and this is an ample opportunity to wish him all the very best. 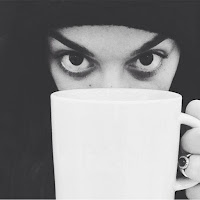 But this song, by Librudi, is as playful as it is perceptive, charming as it is sage... For anyone like me who wakes up each morning hashing over every awkward step you took or bad joke you dropped or tactless tip you shared whether your opinion was warranted or not... I mean, shit. There's a dozen mistakes I probably made last night. But why worry so much? Where's that energy going to go? When I hear Liburdi sing, it becomes clear that said-energy is much better utilized for a song, a melodic song that shrugs it all off...

Have a good Sunday, everyone... 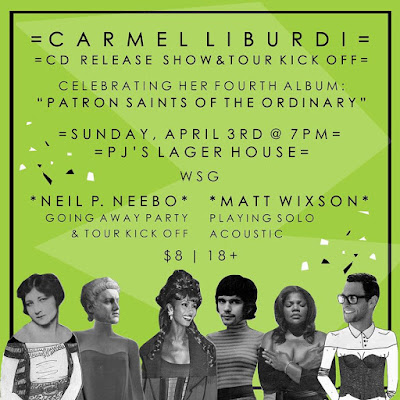 Carmel is so much fun to see live. Pure FUN. her music is all original and from her soul or head. Go see her preform and enjoy.