Josh Malerman - Phantom of the Opry 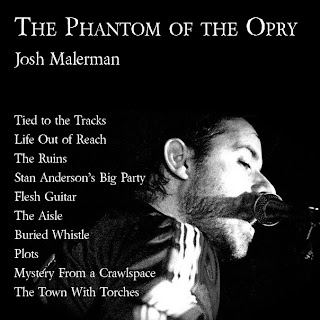 Josh Malerman has always negotiated two sides of himself – songwriter and storyteller. As singer/guitarist of rock trio The High Strung and as novelist between tours, the bridge between these sides was always linked by the obliging pair of guitar and typewriter, helping to make T.H.S. songs (lyrically) into stage-set short stories culling conveyor belts of new vibrant characters and varying circumstances of love, theft and neuroses – over their intricate, hard-driving pop song structures. Certainly not just the “hey, girl, yeah” or “got a new rose” punchy monosyllabic nonsense of most pop-or-garage rock lyricists, Malerman would invite more nuanced characters who plotted and connived, who preserved chivalry or reveled in one-night freedom, monsters and bed-wetting and self-discovery!

On Phantom of the Opry, Malerman is free of the crunchy guitars, proggy atmospheric inflections and spasmodic rhythms of The High Strung and offers up more pared down and pure servings of his songwriting. The presentation is rough and fuzzy - but it's what one can expect from home production. The lyrical content is also eery at times, yes beautiful but yes-also--macabe - but there are these bursts of infectious pop whimsy that keep teasing you back...

We are guided along by Malerman, through the theatre of the album, in an almost one-man show manner, or, as we traipse onto different sets dressed with different characters, and our nasal narrator takes on different costumes, it begins to feel that these songs are each plucked from whole albums onto themselves, varying in mood from poppy marches, to charming waltzes, to macabre dirges. Malerman, who played the instruments and recorded it all himself at home, presents a storytelling-style of pop music, but even more evident and clear cut then with THS. On this night at the Opry, we shoulder our way through influences such as the crowded cloaked masqueraders in the wings and pits of the Beatles’ at their darker, ornately wrung latter-day-theatrics (“The Ruins”; “Life Out of Reach”) to the very plaintive and melancholy-tinged piano-bar gruffness of post-VU Lou Reed (“Plots”) and, we might dare, the classy shimmy and heartwarming orchestral-pop build and sway of a Leonard Cohen (the melodious chorus of the otherwise sing-speak narrative “The Aisle”), and Malerman’s made no secret of his admiration for Bob Pollard, for which we feel a similar crackled aesthetic on “The Town with Torches,” just a nauseating-bend on the acoustic under Malerman’s pure and pained vocals).

But with all that to whet your literate-folk leaning whistle, Malerman, as the conductor of his own musical now, embellishes his appreciation for literature altogether austere, chilling and supernatural with some jarring interludes of ripping guitars and frantic pianos (“First Rise 2”), pedal-fuzzed guitars splaying and cutting under melodies like some crazy krautrock squeegee (“Stan Anderson’s Party”), and the Poe-ish seesaw dissertation over distant thunder strings and coaxing-yet-haunting piano (“Buried Whistle”). All that, and you have the swirl of emotions stirred by the different characters and circumstances laid out as each song stands as its own short story – only now propped up by piano, synth and moderate guitar-n-drum backdrops. Perhaps its strongest element of intrigue Is that after a dozen songs, we never glimpse beneath the masquerade mask of our thespian host and solo-songwriter – the voices and emotions are all those of his characters. Still, the wails of guitars, runs of piano and marching plod of drums are at least all by the hand of the man, the writer, the curator of these characters – and through Opry , we get to know him through sonic sensibility, “…this is how I play,” he nods in perhaps the strongest piece, “Mystery From a Crawlspace (What Is It?),” with it’s Zappa schizophrenia arm and arm with Abbey Road’s charm and prog rocks spacey guitars. Any roughness in recording is forgiven by its charm, the intimacy of feeling as though you're in the dude's living room - (and at some points, deep inside his head...)