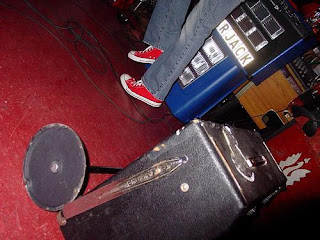 What would you call it? What name would you give to classify it? What spews forth?

Your songs, your words, fitted together in acrobatic contortion, strategically poised for such graceful punches and soft stabs and all the while hoping to spin the minds of those who take it in with the delicate hands of a sculptor, pressing with a softness and a strength upon a mold so malleable upon introduction yet so hardened upon hoped-for comprehension. Whatever it may be…your songs, your words, your music,…your limitless and amorphous paint splattered upon the crumbling but still yet seemingly ceaseless slabs of concrete…occasionally taking it all in, in a very where-do-we-go-next sort of way, on another passenger-seat-bound pull through the cold streets as square buildings guarded by beautifully sulking oaks of red and yellow whirl by you, once again, on another night, out again, and back…out again, and back, like the hypnotic repetitive round of a carousel, through this gutted and glorious city.

Why worry? Why even think about it?

Because I was too sober last night and now I’ve had too much coffee the morning after to not feel like a bee stung fox, high on amphetamines of some kind, running around the forest, ragged and riled, with an arrow through my gut, jumping from one tree stump to the next like my quadruped life depended on it…mind racing as to where the next kill will be, and who…and what hunters are after me now… I am, again, over-thinking…almost everything.

As clean and straightened as any gray-toned office-bound day jobber sipping his last bit of coffee before lunch break by the Xerox room, I drove a gaggle of my closest allies out to Ypsilanti last night, out to Mittenfest IV, to drink in our merriment and exert our boisterousness at the end of such a confusingly regarded decade – shitty for so many reasons, yet, at our age, so undeniably formative; absolutely apocalyptic on numerous levels, yet undeniably the time frame in which we found so much resilience, through our friends and through the endearing strength of small and locally-set little-engine-that-could mentalities of non-profits, do-it-yourselfers, self-producers, and helper-outers-of-all from various pockets of the community.

In such a sober state as I was, on what is one of the more nerve-wracking nights to be out driving with the paranoid thought of a teeth-gnashing, white-knuckled, cross-eyed belcher with a kaleidoscope belly and a mushy mind swerving his Chevy Tahoe from one stop light to the next, mere turns away from tangoing with your unlucky ass, I was able to reflect, in the fleeting moments after midnight, as I spoke with friend and musician/writer/recorder Scott Masson (of Office and The Juliets), on the inevitable continuousness…of writing.

What will I do? Continue. What am I resolving to do this year? Continue. Why even stress about it, why even break it down, why even try to catch yourself as you’re spewing out whatever it is you will spew – the records all these bands are writing as I type, and the records yet to be written in the forthcoming spring. Everything is eventual.

Masson and I, our conversation dotted by a parade of grinning folks freshly charmed by sips of champagne, takes a breath and wholeheartedly affirms that he prefers creating while not under the influence… Indeed, I would agree with him. Though I can’t deny that this screed is being squeezed and pulled by the swirly eyed maniacal devil of the combined potency of three consecutive cups of black coffee, yet still…in the heat of a few well wishers of a happy new year and a remarking upon how this blog actually still writes about music…I would say to you, if you will pardon me this cheesiness, that I write, almost every god damned time, under the influence…of music,…(often your music, as there are so many of you in this city).

I am finding, if I do allow myself to reflect upon development and “look back” at this year and past years, that much of my writing is, inevitably, inspired almost entirely by music. Which is why, to share a personal note, why I can’t yet bring myself to write that confounding and illusive novel of countless false starts and dubiously histrionic plot twists, and instead, am quite able to sit down, consistently and reliably, and put headphones on and write about the waves and walls and winding emotions culled and killed and coaxed, through the recorded arrangements of a human being and a guitar, or the passion I hear in their voice (or, at times, lack thereof).

Where was I? Regardless, that’s the whole point. If you’ve got no passion, what the fuck do you have? Because, when I say, continue…, we, Scott and I, and everyone, will simply, merely, proudly, continue…I do not mean in a perfunctory manner – I mean it because it is a quiet calling, inside of us…and that it is fueled by pure passion. Passion – means we have no choice but to continue. Or, shit, maybe it is that we, in fact, choose…to continue.

I’m crashing on this caffeine high…, I think it’s time to just put the headphones back on, listen…and breath.