“It’s a blessing to be born with a best friend to shred with.” 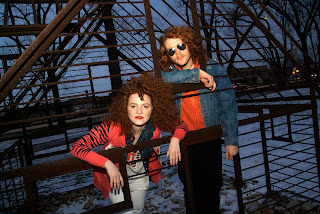 Miss Alex White, Chicago’s baroness of walloping punk-tinged blues, has had a busy quarter of a century life – starting in music from when she was a wee child, beside her brother Francis, making noise together on their first instruments – then playing in a handful of bands through her teens, including “Trash and Heat” (with Francis, in which they once opened for Jack Yarber of the Oblivians) then a recording project (again, with Francis) called “Forestbride,” then into her early 20’s where she played with the late Chris Saathoff in “Alex White and Chris Playboy,” and onto current groups like Candy Apple Killings and Hot Machines. She started her own record label (Missile X) and had her fronted garage-punk band, the forceful and formidable Red Orchestra, signed to In The Red records for said-band’s first two releases.

In April of 2008, she hooked back up with her first true band-mate ever, Francis – and they formed the bare-bones gut punch guitar-n-drum style blues rocking White Mystery, which will release an album this year. The name came to Alex when she was eating airheads candy and found the flavor, “white mystery.” “I kept the candy wrapper and said, ‘Francis, this is our destiny.’”

It’s gleefully grimy and guttural, feedback drenched, splattering guitars and drums like steel-toe boots trouncing a failing factory catwalk down to the cement floor, enriched by the fiery, rousing roar of Alex, as both bodies, one standing at guitar, the other wobbling at a kit-set stool, thrash their own bodies around to the hook-filled fracas with their furled flame-resembling red mops flaying in the wake of their bobbing heads.

“A two-piece is a straight forward partnership with all the essentials,” remarked Alex, who, with brother Francis released a couple 7”s last year, for their single “Take a Walk” (Whistler) and for “Power Glove” (HoZac). “We play what comes naturally, which is the powerful and soulful rock n roll we were raised on. Plus, we’re siblings, so the choice to keep it simple and in-the-family is easy.”

Being from Detroit, I know all too well that tossing the label of “garage rock” on any band can potentially strike some nerves, and Alex admits that, over the years of playing rock n roll and releasing records, she’s gotten thick skin and shrugged off most mis-reads of the band and her sound. “The funniest mis-read is a review where the writer called me a “raven-haired beauty” because of the black and white cartoon on the record cover. I’m very much a redhead!”

Amongst her influences she listed the songwriting of The Ohio Mirros and Twinkeyz, and subsequently the Modern Lovers, Shangri-Las and Rolling Stones. “Francis and I listen to rock together in the car, like Zeppelin and Cream,” said Alex. “He loves a lot of metal, too.”

Up next – a west coast tour in the summer, then Europe in the autumn. You can join the White Mystery club to stay in touch about “parties, shows and records. The rest,” says Alex, “is a mystery.”