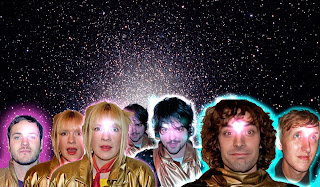 She'll unveil the songs ("Outside Heart" and "Diamonds") on sheaths of wax (limited, 200) at the Atlas Bar, December 18th.

Both of these tracks set on like a dream - some smoky purplish aura oozing out of a bewitching, sinister looking music box you just carted out from a locked closet in order to soundtrack some meditative, cathartic discorporation upon a star-blazed midnight. The instruments are given room to breathe - and fog up the soundscape nicely with their resonating tones. The vocals, beautiful as they are, are fuzzed to a bit of a coarseness that blends nicely with the hollow, shuffilng drums, that ghostly twanged guitar - as the bass' bouancy provides the warmth, like "Outside Heart" lone lantern leading a driving blues-rock ballad. The track doesn't pick up until the 40-second mark... characteristic to KJC, she swoons us with her signature atmospheric dressing, letting a lilting guitar glisten faintly over spooky drums that sound like their marching up basement stairs while her voice reverberates in a dizzying display.

"Diamonds" slows it down, a haunted rocking chair hymn with a devestatingly sonorous piano that captures the confounding beauty of some old world presence, like its finally been let out to fill the room and fade upon us. It's a one of the more beautiful love songs I've heard in a while - but, to KJC's credit, part of it feels scary - to be "the only one left" "the only one of your kind," is, extremely endearing and romantic, but to come to such realization that the love you grasp is akin to an endangered species... well, that'll make you hug them even tighter. Closer.


Opening up night's festivities:
the dark, dazzling, reverb-heavy psyche-folk of Aran Ruth and a new group that started up this autumn- Everybody's In (with members of Secret Twins, T-Bone and the Drones, and Awesome Derek).