Ferndale Patch, the new news/media collective that's been posting content at a commendably swift rate since its website "launched" about four weeks ago, is hosting a proper Launch Party, next Friday, at the Loving Touch in Fernadle. 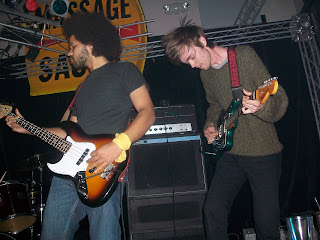 Patch editor Terry Parris Jr., our seemingly tireless local media ace, has invited the community to come learn more (or even comment upon) the "community specific news and information platform" that he and his team of freelance writers (full disclsure, including myself) have established thus far (and continue to update with reports, features, photo-essays and videos, each day).

The Wayne State grad has cut his beat-reporter teeth at various publications (Munich Found, Hour Detroit, Hamtramck's The Citizen) and honed his skills in the online media world via Model D. Now, joining with the vast network of Patch news sites throughout our state and the country, he's spreading his beliefs in the value and possibilities of citizen journalism, with a "community" of writers collaborating to report on this ever burgeoning enclave (Ferndale).
@ The Loving Touch in Ferndale
7pm - 9pm - Free admission - free food - and a DJ providing some groovy ambience
9pm ->