Satin Peaches and Illy Mack 7" Release - 12/10 - on Five Three Dial Tone (@ Belmont in Hamtramck - with: Lightning Love and the Kodaks) 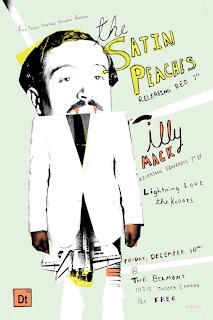 The guys at Five Three Dial Tone know how to get your attention.

And I don't just mean their recent recruitment of two respective luminescent pop/rock groups to their congregation (The Satin Peaches and Illy Mack).

They're offering rather affordable sheaths of 7" vinyl along with cases of cassettes at a celebration with a full line up of bands - ...and cover is free. (this from the same guys who offered up "7's for $1 over at UHF for a while...) Hey, it's the holidays. You need to save your money for gas, beer, ...and a picture frame for grandma. This show is free. Come, listen to music - and go record shopping.

Friday, the 10th, Five Three Dial Tone features the Kodaks and Lightning Love opening for the guests of honor, the Peaches and Illy - as each will release a vinyl 7" and a cassette of demos.

The Satin Peaches give us 9:04 that showcase their evolution from glam punk to a more realized and confident rock swagger - embracing the forcefulness of the guitars, the drums and their own voices. I'm still yet to wear out "Red..." after two-dozen-ish spins this year and Jon Weier's re-recording of the tune gives it more of an atmospheric swirl, more feedback and plodding pianos. "Scorpio" speeds things up with a stomping beat and a fiery fuzzed guitar. Duel vocals intertwine nicely, reflecting the lower-end growl of the rhythm guitars duet with a sunnier surf toned guitar dancing out the melody. 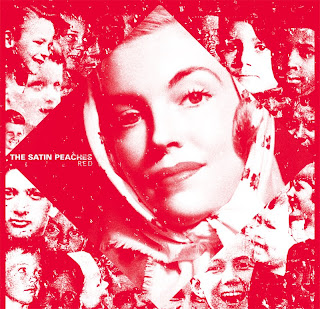 Wanna catch up with The Satin Peaches? HERE - Learn more about their recent tour that took them all around the country, from Chicago to Denver, to Seattle and back again. Learn of their various couch-surfing encounters where they sated themselves with various plates of spaghetti; empathize with their tolerance for the overly amorous dogs roaming across the floors they slept upon and the sense-stretching trudge of nights spent driving a none-too hospitable truck.

And set lists too... 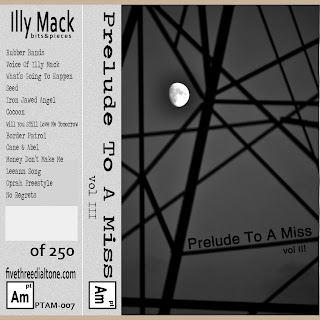 Illy Mack give us four tracks, just breaking 10 minutes. This includes the jittery jabbing 80 second punk pop tear of "Girl, What's Gonna Happen to You," which is offset nicely by the bluesy ballad "God," which accentuates their minimalist charm - the bare yet arresting rhythm of just two stomped drums and the evocative pull backs to just a piano or just the call-and-response boy-girl vocals... "E-cho e-cho e-CHO....."

The duo are exuberant, raw and, as they’re often told after live shows, “fun.” They bounce off each other with a bite and banter typical of siblings, but singer/keyboardist/guitarist Jennifer David’s brown hair and eyes and her deep raspy voice clashes with bassist/drummer Steve Kendzorksi’s bespectacled, bearded blonde look and softer spoken manner. He finally lets his bandmate and sister continue her story about how, after they’d met four years ago, she had started hanging around watching the practice sessions for funk/pop quartet James & the Rainbros (a band in which Kendzorski played guitar) and wished out loud that she could finally start a music project of her own. “I didn’t wanna watch anymore, I wanted to make a band.”

"I was really attracted to Jen's naivety," Kendzorski said. "At the time I met her I had taught music for 6 years and I was always around people who were striving for something that they didn't naturally have. Jen doesn't understand, even now, her own voice and how powerful it is and what it can do and what it can't do. And, how it makes people feel. So, Jen, her voice is magical but she's a shitty guitarist..."
Jen nods and subdues a chuckle, "I just learned guitar when I was 18. I can play bar chords."
"I mean, in terms of 'guitar players'" Kendzorski continues, "...you don't go to our show to see Jen wail or to hear me sing. But, she's learning. Still, now, Jen will go 110% from lyric-one...that dynamic of soft and loud..."
"I just get loud," she laughs. "Steve's like, you gotta bring them to a point, and then you let it loose."
"It's the opposite of what I'm used to dealing with, "Kendzorski said. "It's like being an acting coach and having a bunch of people who have a hard time being loud or going big. She's like an over actor."
"I'm a ham," she nods.
~
Come experience two dynamic Detroit bands - the 4 piece Peaches with their raucous rock n roll and the 2 piece Illy with it's minimalist soul/pop - The money you save at the door impel you to consider the two cassette tapes that both bands are offering.
You'll get demos, covers and live recordings from both bands (track lists below)...
And if that's not enough - you get digital download codes so that you can burn yourself a CD-R the next day... that's assuming you're like me and still like listening to CD's in your car. (Who knows?)
Tapes, Vinyl, local bands, Belmont...

7. Will You Still Love Me Tomorrow (live)

Prelude To A Miss Volume IV: The Satin Peaches

4. The Unfinished Adventures of Agatha