The word Weird comes up a lot while chatting with the Johnny Ill Band. 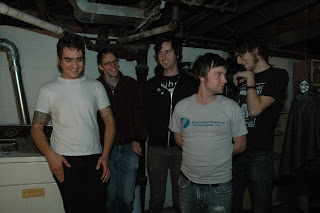 Johnny Ill sings about breaking his washing machine and how having his dirty clothes splayed around his room makes him feel weird...real weird.

A lot of people, in fact, think his lyrics and songwriting is “weird.”

This current line up (that solidified in late 08, for the most part), tells me about how they recorded their new album Ask All The Doctors in a “weird sex den, in a Chelsea cabin…”

As we settle down to talk about music, Johnny snacks on Nutella spread; his band mates cast off hazelnut flavoring and he just shrugs, looking down at his shiny brown smear of toast...“it’s weird…”

Singing in front of people is weird, too.

Beyond that, it's also weird to all five of them that there seems to be more people regularly coming out to shows, particularly within the widening circle of avant-gardist rock and punk groups tied to the X! Records label...

Derochie (himself eager to get out into a music project since the disolving of Detroit-based Fontana) is asked what it’s like playing in the Ill Band and what it's like playing in Detroit’s music scene.

When I first heard a Johnny Ill Band, I thought, lyrically-at least, that perhaps Mitch Hedberg's bemusing charm had been resurrected through the voice of this shaggy, Ypsi-bred, singer/guitarist. "...someone said it was 'New Detroit' but sometimes it's still real bad, and sometimes it still feels like 'Old Detroit' and you forget about the advancements in technology...and you might come home and someone stole your car...well, I live in the future but sometimes I for-get...cuz the world is bad..."

That's not exactly a melodic example, but it still captures his unique bead on these strange daily things we call -life. His mates help him visualize a raw, scuffed up space-pop, swirled with synth and gnarly roars of feedback, snarling bent-up guitars and shuffled along with sturdy, mostly minimalist rhythms.

...but back to that house, with Dunkerley and Wise. (read a Metro Times feature, here). ...A fine, and not-so-cluttered house, that acts as practice space for the Beekeepers, Ill Band, Frustrations and the Terrible Twos.

Dunkerley is back on track, after slowing things down, just a bit, with X! Records and his band, noise-rock trio Frustrations. Aside from moving, he wrapped up a degree in film studies. This was an industrious autumn for X!, just recently dropping a 7" single for the Ill Band as well as Frustrations newest LP Negative Reflections. A review of that album is up here. In a bandcamp/digi-world, Dunkerley is "still committed to that physical product" of vinyl, and indeed, as much as ever, excited and inspired by the music going on around Detroit. It's been a productive 8+ years for him and his label.

Also getting back on track is Detroit's underground film culture.

Dunkerley's band is performing as part of a fundraising concert for his roomate, Wise and his group of cinematic collaborators, otherwise known as the group behind celebrated (and recently closed down) movie house, the Burton Theatre. Well, that dream lives again, with Corktown Cinema. Feelings are joining the line up (with a suggested donation at the door) for tonight (12/15)'s performance at the Lager House.

Before the bands perform, the Corktown Cinema team will screen the Fugazi documentary -INSTRUMENT-

Ask All The Doctors is out on Urinal Cake Records.
Posted by jeff milo at 1:08 PM