Stone Calendar / Is It Snowing Where You Are? 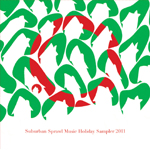 Still sifting my way through the SubSprawl Holiday comp...

Favorites and curiosities, so far, include:
"Jesus Was A Gangster" - by MC Rallz
"Holiday Road" by Deadbeat Beat... nice touch
Paincakes...a perennial contributor to this list...
And with Child Bite mutating their own version of King Wenceslas ...crisp and even
and then there's this one, sounding like a college thesis paper -
"Facts Regarding the Great Halifax Explosion of 1917 and it's Effects on the Official Christmas Tree of the City of Boston" by Greatest American Beekeeper[
...dig in...

Make a stop at that site - (...and, inevitably...consider the fact that Quack Media slashed their prices in half - in case you wanted to take care of some shopping for the MusicHeads in your family... or, just, yourself...)

As the year winds down and I start looking back--as much as I start looking forward, ...there's one song that keeps ringing out in my mind...
Hi-Speed Dubbing's "Stone Calendar..."


Hi-Speed Dubbing - "Stone Calendar (2012)" by DC/Milo
~
^This is a forthcoming 7" vinyl single... from a subsequent forthcoming album, by this Detroit quartet of blues-punk amalgam rockers - This was one of their first songs, penned by Justin (Audio) Walker, (who also records as Brilliant Violence)... reflecting a hard-hooking, rip/roar/tumbler phase of his writing, back in 2008, as the band was just coming together.
That riff, wobbling upward, jerking side to side, sweetens up an otherwise fiery jam that, underneath the roar of the guitar, is haunted by earnest uncertainty... If this is it, after all...better make it worth your while... and better you shout your lungs out...
--more sounds here
~

Another song that always gets stuck in my head around this time of year is one that's a bit harder to find, out there on the Internet, in its original form...
But there's at least this charming (softly cacaphonous) video...

Saturday Looks Good To Me - Peg

"It's almost winter time..."
Makes you nostalgic for the modern classics... like Saturday Looks Good To Me's Fill Up The Room...