The year is ending ...and the time has come to add up the numbers... 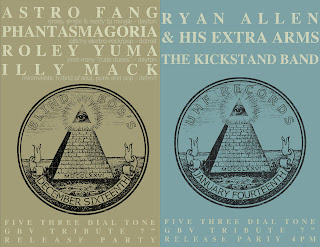 "-Once upon a time there was an idea to do a short run split 7″ vinyl series that featured cover songs of some of the artists we love and adore.

The series will be known from here on out as Disarm The Settlers..."

That mighta' made for interesting conversation down there, or perhaps raised some of their brows at its perceivable presumptuous, since, ya think about it, Dayton is the hometown of prolific-lo-fi songwriter Robert Pollard founder/leader of GBV, the birthplace of said-band (and many other notable indie-rock icons).

The accidental formula/combination served 53dt well:
->...get one songwriter whose been in a fan of Pollard/GBV's work for his entire adult life and had it soundtrack his late teens and college days substantially enough to have even seeped, inevitably, as a formative influence upon his recent cannon of work... i.e. Ryan Allen (& His Extra Arms) - and on the flip side, put a scrappier, happier-go-luckier trio of mid-20-something's who probably haven't, if ever at all, listened to that much GBV in their initial days of local bar show circuits, i.e. The Kickstand Band...

You get the latter doing a combo of the lulling incantations of "Non Absorbing" into one of their most well-loved tracks, "Game of Pricks," with the former, that being Allen, doing another quintessential ("I Am A Scientist" off of Bee Thousand) into Alien Lanes charging anthem "Motor Away..." (listen here).

***And pick up your copy, at a forthcoming show in January - at Royal Oak's UHF Records...

~
That said... SelfSays--has been featured in yet another of his seemingly unending string of collaborations - recently dropping onto the Internet with (iN)sect Records' Starship 27 single series - rapping over a clattering, synth-ripping space-out jam by producer The Kone - listen here.

And...now that 2012 looms before us, it's got me thinking back upon some of my favorite live/local music moments were, this year.

One particular moment involves SelfSays, (aka Charles Vann,) performing at Sparklefest, inside Northend Studios. It was on a warm, wildly windy night in the middle of summer, Self, rapping, pacing around, half valiant, half shy, sharp yet endearing, in the middle of a cluttered room, some cavernous hollowed-out vestibule with strobe lights and cigarette smoke, the bass blaring, the huddled crowd grooving together... and fireworks in the background, over the skyscrapers, from the Tiger's game having just wrapped up.

Or, it got me thinking back to another moment... back to the Blowout - when the now defunct psyche-folk quartet Golden was playing inside the wood-paneled, '80's-sports-bar-smoke-soaked ambiance of Kelly's Bar, with ice and snow swirling outside the door and a literal sausage factory right across the street. With midnight setting on... And they decide to cover the Cranberries still-well-loved yet overplayed, epic, yodeled, softy-alt-rock anthem: "Dreams..."

To have 49 buzzed-to-drunken, coat-swathed hipsters sardine'd together inside that bar, upon slippery linoleum, howling out those closing bars of indecipherable chant/scatting...was invigorating...

To shout out together, where no one knew the words, really, no one could tell you the words, and no one could even understand anyone else's words, what with all the Millers and Vodka this pack had guzzled,... But it was warm and endearing, in its way...
These things happen sometimes...

Further thoughts on that closing "memory" - National Public Radio/WNYC's Sound Check had a feature on "Singing in Fictional Tongues," yesterday - whether Sigur Ros, Enya or mumble-tracking ala The Talking Heads. (listen here).
~
Posted by jeff milo at 1:00 PM