All that really mattered, at the end, was that we were talking about it. 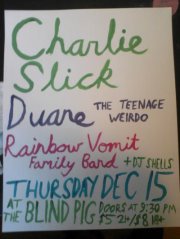 Way too soon, then, in those moments following the set at the 3rd Street Bar, to even attempt to surmise just what it was, or what it came from…what it imitated, what it re-imagined… The impact was quantified in our questions.

And, perhaps, it's redeeming quality is that, whatever it was, we didn’t want to cast it off right then and instead let it linger. Welcomed it lingering, mostly.

‘It’…was Duane, “the Teenage Weirdo…”
more info on where/what/when to see-and-hear can be viewed here.

But, anyway, back to the original essay I wrote about scenes, cycles, weirdoes and inspiration... The New School(s)
~ 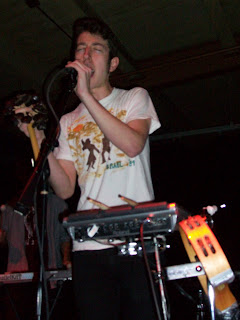 That we were cozily shunted into what used to be the billiard-hall portion of the Magic Stick last night, to host shows that would likely only draw a hundred or more bodies, made it that much more astounding, that there was all this ...energy compacted into one little, mostly insignificant space, itself a fraction of a larger complex inside an even bigger, whirling, indifferent city, a patch of mossy energy inside a shivered shell, throbbing with the thrum of synthesizers and quaking in spurts with the fuzzy thunder of bass amps...

New dance music from new songwriters... Phantasmagoria playing to a packed crowd last night. Some their friends. Some of them same-aged Wayne Staters, many of them diplomats from other bands... And this, only 14 months after I saw them play for 15 people at Paycheck's on a random Friday in the dead of late Autumn... This time, it was quite a different Friday...and Passalacqua, by themselves (or girded by the Babini's) made sure of that!

But it's not that I want to reach for grandiose delusions that dress these, what shall we call them, moments? as anything more than humans gravitating towards music as a means of galvanizing escapism... a therapy... to move, to groove, to socialize (dip, perhaps and to dive)... 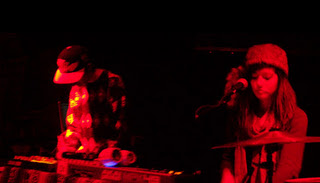 But that 'have you seen them yet?' syndrome catches so easy, so quick... The new school - to what, size them up? Fervor has to be tempered, from time to time... else we lose ourselves... But then, how will we know our true potential, does the scene fly together, upward, synchronized like trapezists in tights, can we all catch the same swing? How do we know how much we can unveil, how much we can advance-and-transform music and culture, if we don't stomp the pedal, let it all boil over, get crazier together...

The kind of envelope pushing exhibited through the wild grace and showy strut of glam-pop star Duane The Teenage Weirdo...who performs in about four hours from now, tonight- at the Third Street Bar, alongside Human Eye, a band that, in bemusing ways, reflects his approach, his display, his delivery - at least in terms of, frankly, showing you something you haven't seen before - whether it's ebullient, flamboyofreak, avant-elegance -or if it's ferocious, punk-imploded space-rock decked with crude and disturbing props and oozy theatrics.

The HotSpotLite of local media gets cast around at commendably twitter-paced speeds these days... There may be those out and around who still echo the age old hawing-hems, Why such a to-do over them and not someone else...or not me?
That loud mess is, or at least should by now, decreasing...

Yes, the new school is weird and exciting, curtained in surging synth fuzz and adorned to enticing perfection with indelible beats of chest-thumping amplifications... But we're all bitten, ain't we... -whether we're 22, whether we're from Detroit or Ann Arbor, whether this is our fifth band or if we're on some magazine's cover or if our Kickstarter got funded in 23 hours... whatever.

It's the energy. Here, or even in Ypsilanti...down to Toledo, even, or right over in Ferndale - age, style, clique, location - all of it is secondary to what we can all take heart in... the energy.

It's what keeps us sane, really. We release something at these shows, these moments, that may not be tangible. If you're anything like me, you walk away inspired, because you want to reflect the energy you just saw (felt?) emitted on that stage, in that moment, whether its from Duane or from Timmy Vulgar...or Jeecy & the Jungle!!
(video by Kelly Bennett)

Or, we could be, I suppose...
Where was I going? Fred Thomas is still kicking ass, the Sights are turning 12-in-style, and Phantasmagoria is finishing a new album while Duane got signed to the Black Lips label; the Mexican Knives are sharpening by the week and Danny Kroha has embraced his penchant for blues with the Darleans while Lightning Love starts striking again with an EP and an LP on the way and Passalacqua and Eddie Logix and Detroit CYDI begin a steady intertwining of the hip/hop scene-into-the-indie-rock crowds...

As Phantasmagoria's Christopher Jarvis put it: "Everyone's feeding off each other's creative energy, its great."

Or as Duende's Jeff Howitt put it, earlier this morning, on the circuity of any/each community's percolating music culture: "...Was a guitar then a turntable then a keyboard now it's a guitar again... Hot funk.. Cool punk...Funny when you look back and didn't know you weren't the only one..."