I'm cursing that I haven't yet found myself an effectively heroic winter coat.
My hands are purple and my car is running out of gas and Michigan's imposing winter is rumbling off down the horizon, snickering with excitement for its impending arrival.

And I'm reading more Moby Dick, getting way too pensive about what lies beyond... And I start rambling with a friend - to the point where I declare:
that...
Profundity seems to have diminished into near nothingness.

I was considering seeking out where and when -profundity died... Likely somewhere, back, up the sloped digi-road, millions of hyperlinks, refreshes and status updates ago...

Everything is an event. In case you didn't know this was happening, it is, right now, ...or, it did already...? Well, in case you still wanted to know...

The use of this knowledge is still being determined. You're expected reaction is to like it.

What will you do with this knowledge, now that you're aware that this happened, that this human said or did this...Whatever it is... Will you retain it? Do you need to?

Does it effect what you do next?

Everything exploding everywhere at once. When all you should probably be concerned with is what you're going to do in the preceding moments.Likely, the most useful thing would be to not worry about where you could be - no sense in putting your own foot down on the accelerator pedal if the car's already rolling, in neutral, down the road to digi-madness.

Perhaps jump out of that metaphorical car. Stop at some idyllic coffee shop at the curb, halfway down this sloping Internet road where we tune out some of the new-norm-static.

Photographer Trever Long and I made the motivational mistake of performing such a stop-and-sigh, last night, at the art-decked Cass Cafe, wherein we asked ourselves, just why the hell we do what we do... (which, in some form or another...is a documentary of just what the hell is going on around here...)

What is the essence of inspiration? What is it that would motivate Trever to spend 20 hours on a photo shoot and me blowing whole afternoons over essays -just to, (however crazy it sounds), wind up reaping no financial gain, other than the love's labor-reward of being assured that we've framed something and shown it out, to the world?

We, like you and so many others, feel as though we fly in a nuanced holding pattern. I'm not quite referring to the overall stagnation we feel, that disenfranchisement that the Occupiers have marched-against; yes, here we are, as Millenials, trudging/dragging all Sisyphean through day jobs that start to feel like cross-country skiing while our parents talk of the good old pre-inflation days. That's unnerving enough.

But, our holding pattern concerns crumbling industries. Documenting the arts is like... I dunno, man, but sometimes the devil on my shoulder tells me I shoulda went into sports journalism. Eek...

The internet, blogs, zines, what have you, has shaken up our games. How does a photography scholar, someone trying to construct a canon of work, bolster a portfolio and one day, hopefully, steadily fill the walls of galleries for exhibitions, compete aginst the tyrannical attention-span-tearing tumblr's and a culture that's gotten dependent upon youtube's quicker, diriter, spoon-feeding's...

How do I compete in the days of an-already-long-dead print media... Long-dead blogs, even. We still feel ourselves cut, somewhat, apart from those who would write about music or take photos of bands for the reward of weekly paychecks. The hope is to do, or try, something more, something different.

We want to know you. Hear you out. Frame you proper... Something crazy like that... Beyond a phoning-in...

To shorten this rant - if I wasn't writing this blog, I'd be trying to write a song. I'd be trying to paint a picture. I'd be trying to take a photograph. I keep writing because noise keeps churning from basements and living rooms in this city - thus, I'm heartened by so many other subtle-esoterics and charming-weirdos who have decided to dedicate their time to something, anything, beyond the bland and defeated who resign to watch primetimeTV and go to megamalls and the giant movieplex...

What it was... I wanted to make Facebook the culprit, the beast that put the bite marks of hinted jadedness into me, that dystopic doo-hickey that made me sound all curmudgeony about all these blurring updates and hey-did-you-see-what-Thom-Yorke-just-tweeted...and all such nonesense. (There are much more substantial and necessarily scary things going on in the world, dear reader, from rising sea levels to Detroit facing the potetial of being run by an Emergency Manager)...

The point is, I haven't left here yet because I'm bewitched by all of your potential... And, Trever and I being documentarians (of some kind), it leads us to ask all these questions, sometimes way too early, earlier than when the answer is fully formed.

Trever and I are all too ready to form epic memories - like Will Hermes' latest: Love Goes to Buildings On Fire - Five Years in New York that Changed Music Forever... Trever and I,...we're just inspired, is all...wanna shout all this out to the world, now, is all! 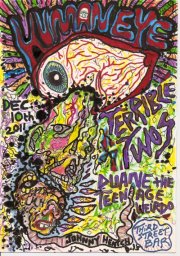 Rising glam-revivalist Duane the Teenage Weirdo pairing up with explosive, slime-splattered punk avant-gardist Timmy Vulgar (via Human Eye) -as part of Saturday's show -with a welcomed appearance by the Terrible Twos ...along with Keep on Trash DJ's: Dave Buick and Johnny Hentch -  - 3rd Street Detroit (4626 3rd)

It's line ups like that, -rookies and veterans- -glam and punk- that further fosters the verdant variety of this scene.

There's no need for bands to "make sense together" when they play a show - no need for 3 all/only punk bands, or all rock bands, etc... 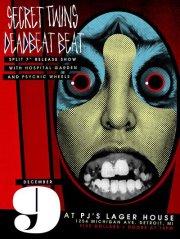 Since I won't have time to write about it tomorrow... I'll write about it now...
One of my favorite albums of the year comes from Chicago's tumble-pop/indie-rockers Hospital Garden that being their Haunter LP (the title track from which can be streamed below...)

Hospital Garden, along with Columbus' Psychic Wheels, are coming to town, Friday night, at the Lager House, to synch up with their friends, Detroit-set shred-pop duo Secret Twins, who, it turns out, recorded a split 7" vinyl with the fuzzed-out-sunsplattered punk/pop trio DeadBeat Beat...

P.S. - Do you really wanna know what's going on? And actually have time to pore over it, take a breath, review, and take notes? Just check out Shelley's Michigan Happenings - for those in the-ever-running-know, that's the only blog you'll need to check...

P.P.S. - I'm not sure if I resolved how uneasy I can get at how much there is to consume, to take in, to review, out there, on the internet...

I'm still worried that profundity is dead. ---The Beastie Boys and Red Hot Chili Peppers and Guns N' Roses are in the Rock n Roll Hall of Fame...now (--or, at least, they will be...soon enough). What does that even mean anymore? The culture heroes of the past still retain the pedastols... Whether it's Axl Rose or the CBGB's troupe written about in Hermes' new book, or even the Steve F'in Miller Band on any ol bland, repetitive classic rock radio.

While bands around here are writing just as inspired (and often profound) songs as they, or anyone else, every other weekend...

Trever and I are just trying to tell people about it, I guess...

For now, I'm turning in...reading a bit of Moby Dick, then off to sleep...
"...This is much; yet Ahab's larger, darker, deeper part remains unhinted. But vain to popularize profundities, and all truth is profound..." (H. Melville, Moby Dick)
Posted by jeff milo at 6:04 PM