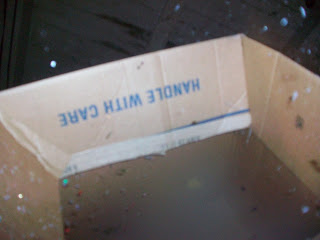 Everything all the time...

The sound gets into my bloodstream, makes me type faster.

The song. The music.
The voice, its melody, spurs me to snatch words from some sudden ether, bumped and beguiled that I could be so moved by just two minutes of modest, taped-together noise; cute clatters and humble howls from dusty, cavernous basements, temporary inhabitants who write and record, their walls exposed and carpets torn, wires strung here and there, plugging in their beautiful burdens--their amps-a'-amplifyin'...

Song after song, from undergrad troubadours and blue-collar balladeers, the soulful kids who are galvanizing their punk side, from the hip-hop dudes who're savvying their new penchants for sleek electro-glitz pop samples; jazz players back up rappers, psychedelic rockers turn their ears toward soft ambient pop composers; while the rockers get weirder and the new abstractionist's seem, almost, to lap back around and seem right-way-round again - it's all Detroit, now... ...everything is everything...

Five years ago, when I lived in a neo-hippie haven, co-op housing on the outskirts of Michigan State, I used to invite bands from Detroit to come play house parties. A friend of mine, an integral ad-hoc roadie for those shows, who lived with me, had a characteristic farewell, whenever conversations ceased or we parted ways for class: "Take it slow..." 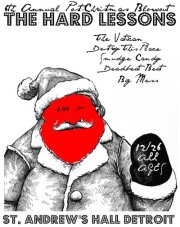 Augie, from the Hard Lessons... (who perform their traditional day-after-Christmas concert, Monday, at St. Andrew's) caught up with me, albeit through the fleeting, ethereal call-and-response of text-messaging, just yesterday.

"I see you're still writing about Detroit music..." was dropped in the middle of the characters...and no, he didn't put the italics in,...  I did. Cuz I say that same thing to myself every eleven-days or so...and the italics are always there.

And I'm either in disbelief, disillusionment or appreciation...excitement even.

Because why stop now? How could I even hope to take it slow... New songs go up every five hours around this town - our ears dippinginto the motherboards of any of dozens of local songwriters, hearing their new songs...  almost voyeuristic -if at least constantly-plugged-in...

The Rock Star died, indeed due to a considerable blow delivered by music pirates, kicking out the pillars of the industry rigged by major labels. But it also died because we could all start hearing each other so readily.

I'm listening, right now, to a brand new album from a band that's been kicking and singing around this town a while now - their latest work up and streaming upon the temporary transmittor of choice for our blurring times - the bandcamp contrivance
The Questions have slogged and soldiered through a helluva year to make the record of their lives - the most realized work from a born-poet backed by a full band of jazz-mutating, blues-stomping, psychedelic rock n rollers...

Broodish bass grooves and steady steppin drums, a trumpet lilting it's wheezy purr out under beautiful and blemished words, barbed and whispered, -an empowering and haunting indictment 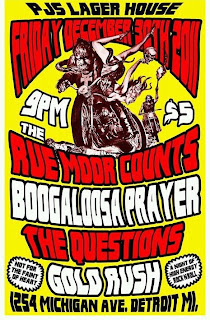 Their currently slated to play the Lager House on Dec 30th...


And-anyhow, we're more than just a music scene anyway! We've got burgeoning filmmakers coming out of CCS, or cinema preservationists running movie houses like Corktown Cinema and we've got talented poets getting their voices heard through new publishing companies like SIC.Detroit.

But anyhow...
~
I used to tell myself that I was still writing about Detroit music because I was waiting for that day, that day where the scene would swell to the point where I could no longer take-it-slow, even if I tried...

What if we became the next Austen, was always the unspoken question...
But why would we want that?

As NPR reported this week - the actual musicians can no longer afford to live in the "live music capital" of the country because so many non-musician/listener/fans have flocked their - thus jacking rents up across town, propping up trendy condos, the listeners are pushing out the performers like invasive carp upon native sturgeons or trout...

That's one thing Detroit, in its current state of economic woe, doesn't have to worry about... just yet. We're in this strange middle ground, still yet ignored by big-time/national/mainstream press... But that's changing, little by little. Danny Brown's name is everywhere - and indie sites can't get enough of Dale Earnhardt Jr Jr... Phantasmagoria could be swept up any minute and in the meantime, and regionally- the typical cliques that separated genres, rock from hip/hop, are breaking down and giving way to healthy collaboration -

The reason I lose myself over local music - the reason I can't take it slow, the reason I'm still writing about local music, is the same reason anyone else like me (who doesn't play an instrument or who doesn't write songs ) keeps heading out to live shows - We're inspired in some weirder way, most likely fed by the tangibility of the-writers-of-these-songs---these-songs-that-get-into-my-bloodstream.

The Rock Star died because I can listen to these songs and then see the person who wrote it just two hours afterward, at the bar... talk to him about it. Touch them, either to shake their hand or shove them in the shoulder. The admiration, or at least, the appreciation, is crystallized when we have that tangibility.

I can't talk to King Creosote or Jon Hopkins so readily, I can't pick the brain of Cass McCombs or John Maus over coffee or even readily chat up Danny Brown, unless I set up a phone interview. But I'm going to see Eddie Baranek tonight at the Stick... and have coffee with Drew Bardo the next day...I can ask the former about his band's 12th anniversary and I can ask the latter about that line from the song: "holy jack rabbits fucking in the streets..."

There's something about being able to touch something in this vacuous, fast blurring internet-jumbled-deluge... To be able to actually catch that songwriter, and, indeed -take it slow, with them, a one-on-one over a pint or a latte, in a quaintly personable world outside of status updates, outside of MP3-streams and press releases about new tour dates...

Because unlike Austin, we're all still here, sorta... (Albeit scattered up and across the northern edges, some west, some east, and some way down in Mexicantown)...

Still... writing about Detroit music. Because I can't not be hopeful for the next good year - with everything moving, happening,...so fast (no more taking it slow)...then that's an indicator of the potential velocity for innovation...some profound permutation... a new wave, yes.

Not that we've yet reinvented the wheel through music - but we could, within the hour, even.

But it's not like I'm waiting for us to become Austin - who wants to? We're already some kind of other thing - The New Weird, steadily reforming every day.

You're all telling each other, every day.

And even those conversations are supremely secondary...