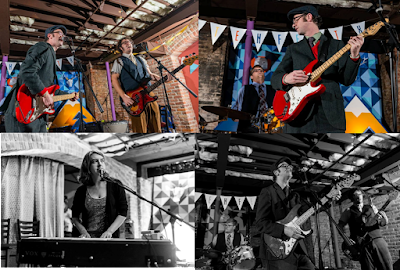 Loose Teeth are an Ypsilanti/Ann Arbor based quartet and today's the day they release their debut EP, The Doppler Shift. If anything can sound elegant and guttural, beautiful and bruised, ragged yet reinforced... you find it here...

Gregory McIntosh has always been the secret weapon of Ypsilanti, contemplative wordsmith, subtly graceful guitarist, appreciator of dynamics and able to go from vulnerable sonnet singer to pugnacious fuck-this growler... Greg's songs... Loose Teeth songs.... can go from the low to the high in this invigorating way; from hunched on a stool or leaning heavily upon a fence to fucking jumping up onto the bar with a fist raised or outright kicking the whole fence down with one right round house kick.

McIntosh has contributed his guitar and backing vocal harmonies to Misty Lyn & The Big Beautiful, Matt Jones & The Reconstruction and wrote a few devastating beauties while in his memorable tenure in The Great Lakes Myth Society. But Loose Teeth, which slowly got rolling in early 2013 but picked up steam in 2015, are ready to release their first EP. These are McIntosh's most realized, most lively, most poignant songs to date... It's the hitting of a new stride, or a burst of fresh endorphins propelling the next 13 kilometers... Loose Teeth are a rock n roll band, but they're informed by traditional twangs and gritty kicks of folk and Americana. But, more than anything, it's informed by the human heart and reverberates with a humanistic yearning for a certain kind of tranquility...

But I'll let McIntosh tell you the rest, in our Q&A below... 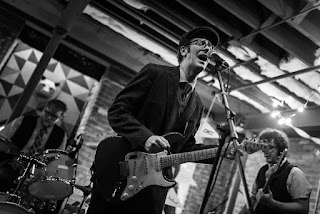 How and when did Loose Teeth come together? And what can you tell me about these four songs?I always think of Loose Teeth as having been born in a house over in Corktown that Matt (Jones) and I were painting in the summer, three or four years ago... I played (Jones) a demo of "The Jagged Edges of Big Ideas" and he said, '...Let's go work on it after we're done here...!' So, we holed up in the basement of the house on River Street in Ypsilanti, which is now becoming famous as the place where (Jones) has recorded the bulk of the River Street Anthology. And, from there, we hammered out a very basic arrangement. It felt different than the older songs I'd been performing....

I asked Mary Fraser if she'd be interested in playing some songs with (Jones) and I. Then we found Tom (McCartan) to play bass, and the whole thing fell into place.

Poignant, yet defiant. Worn-down, but resolute. Hearts on the sleeve, but the sleeve's almost like steel wool.... There's dusky twangs, hearty vocals, vigorous crescendos. It's soulful stuff, Greg. Could you talk about your pull to the bittersweetness, and what kinds of intrigue or what kinds of power can you find in the stories of wounded spirits that rise to a recovery...The bittersweet, for better or for worse, comes from me living in an anxious space for so long. Though in recent years, with the loss of both of my parents, being attacked by a pitbull, and dealing with the legal ramifications of both..., I've had to learn to manage my anxiety and depression in ways that I hadn't had to before. Because....the forms needed to be filed and death certificates needed to be presented in a timely manner, regardless of how scared or helpless I felt.

In the past, anxiety would cripple me, sometimes making it difficult to perform even the most mundane tasks. But reading about the vastness of the universe, the insane oceans we have here on earth, or watching Planet Earth all help sooth that part of my brain by forcing me to step way outside of myself and take a look at how small both me and my problems really are. But you know what else helps? Big, cathartic rock and fucking roll, which, when I attempt it, comes out with the hearty vocals and crescendos you asked about. Hopefully, those dynamics are meaningful and powerful when others listen to it too, but I'm just trying my best to keep my head from caving in on itself.

And about that lyric... "being a beacon for the broken hearts...?"“...being a beacon for those battered hearts has more or less become my art...,” that was just a reference to a particular time when I had a few folks in my life who were roughed up by whatever psychic maladies with which they were dealing and they'd brought them to me, dumped them at my doorstep, and took off. It felt good to empathize with these folks about something other than the sadness that came with watching leukemia take my father out of the world. But the lyric is meant to be an admission to myself that focusing on other people at that time and not giving enough attention to my own brain probably wasn't the healthiest way for me to deal with what was going on in my family.

Your lyrics can be so literary sounding... More than that, it's often what resonates most for me about Loose Teeth, a narrator that's taking stock of so much shit, and seeking solace... That said, can you talk about your lyrical influences, other songwriters (or writers, in general) you've admired and that you feel have informed your own work.... I've heard a song of yours called 'Luke Haines...'Luke Haines was the mastermind behind the early '90s group the Auteurs, among other projects. His songs are dark. They're mean. They're sardonic and witty and bizarre.


Excellent adjectives....The critics at the time called the Auteurs “the new wave of new wave” and (Haines) is considered to be, in some circles, the father of Britpop, which he denounces and says he hates. Oasis, Blur, and Pulp, etc. Those bands never did anything for me either, but then none of those bands ever wrote about unsolved child murders, British wrestling in the '70s, terrorism, or made a children's concept record where all the heroes die in the end.

I was in New York City a few years ago in a self-imposed exile, and I started writing this song that felt, to me, to be a melody that Haines might have penned, so I decided to write the song about him. When I was 80%, or so, finished, he released the album Rock 'n' Roll Animals, the “children's” record I mentioned above wherein he imagines three of his own songwriting heroes (Gene Vincent as a cat, Jimmy Pursey of Sham 69 as a fox, and Nick Lowe as a badger) fighting a giant mechanical bird, which seemed to me to be a sign that I was on the right path in writing about him.

I'm sure he'd hate my song.

What about other songwriters... I mean, particularly, you've collaborated, or at least become closely acquainted with so many songwriters around "town..." (or, Michigan, rather...)There are so many songwriters that have influenced me, it's hard to keep concise about it..., but nearly all of them are lyrical dynamos on top of being pop masterminds. There's Andy Partridge of XTC, continually blows my mind. As do Randy Newman, Nina Nastasia, and Andy Prieboy.


Locally, we've got Great Lakes Myth Society... (I'll just check off a clipboard...) Matt Jones, Misty Lyn... Drunken Barn Dance...
I was lucky enough to spend so many years playing with Jamie and Tim Monger (Great Lakes Myth Society) and I cannot emphasize how much those two taught me about music and music appreciation and exploded my mind when they'd show up at rehearsals with a new song in tow. The three of us were in a friendly competition, in terms of songwriting, and I believe I'm only now beginning to catch up to the level they've been writing at for years.

Also, Leah Diehl of Lightning Love is another masterful songwriter I admire. I really think she's a genius; sometimes penning songs that seem very simple, but when they're dug into, all these layers come out and it's clear that she's operating on a different level than a lot of people out there. Let's see... There's Jim Roll, who helped engineer and mix the Loose Teeth stuff... He's always been someone I admired; I met him 20 years ago and was intrigued by his presence in the moment, both as a songwriter and a human, ever since.

Then playing alongside Matt Jones all these years and being able to pick his brain about his approach to songwriting and see, up close, his attention to detail and work ethic; that's been awe inspiring. I played with Misty Lyn & the Big Beautiful many moons ago and watching her continually escalate as a songwriter is astonishing; she never seems to plateau, but continually  ascends in her construction of songs and every time that she blows my mind with a new song, it's eclipsed by the next.

Then there's Josh Malerman of the High Strung. Geez, that guy is amazing. His approach seems so fluid to me, like he just barfs up a great pop song then shouts, “Next!” and barfs up another great pop song. And Scott Sellwood of Drunken Barn Dance! The whole reason I play guitar in DBD is because I saw Sellwood perform solo at the Elbow Room and his songs slayed me so hard that I bee-lined to the stage after the set and asked to be a part of what he was doing, though we barely knew each other. His songs are so graceful and lyrically magnificent. I still can't believe he obliged me....


And it's just that humbleness that has made it all particularly moving when you do get to be 'in the spotlight...' as it were... If it's one of your own arrangements with GLMS, or if it's Loose Teeth. But rock 'n' roll...music biz-shit in general, requires one to shed subtlety, or sometimes even shed-modesty, and play the self-promotion game... That said, I'm excited for this record release, because you've been toward the side of the stage for so many shows with other bands, now...it's you!
Yeah, I'm not very good at the self promotion, honestly, and there are definitely times I long to be back in a band as a guitarist who sings occasional backups... But what the hell?!! I'm proud of these new songs and I want them to be in the world! I'd like them to connect with other people, but I'm alright if no one digs them because I know I've done the best I could do at this moment. As for the performing aspects, it doesn't bother me at all. I'll get anxiety attacks before a show sometimes, and nearly always after the show is over, but all I've got is what I can give, so if it doesn't resonate, so be it.

What's the biggest takeaway, the life lesson learned..., after 15 years of playing, gigging, writing, recording...etc....Somehow, I've been able to play with a bevvy of smart, talented, compassionate, and brilliant people for so many years it rattles my brain in the greatest ways. If life is gonna kick your ass, and it will kick your ass, better to have a bunch of these thugs around to help you turn a bunch of songs into an army and push back for a while. I've been lucky and I'm grateful. 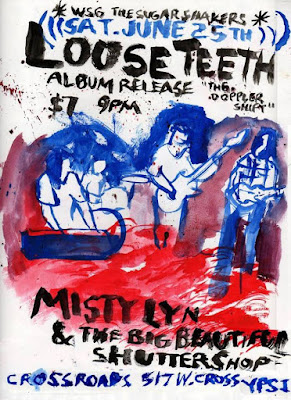 This might be an older one of Greg's songs, but I love it