When you read Tim Monger’s name on the sleeve of his albums, it’s: Timothy Monger. But in the proceeding interview, I’m choosing to refer to him as Tim, for expedience. 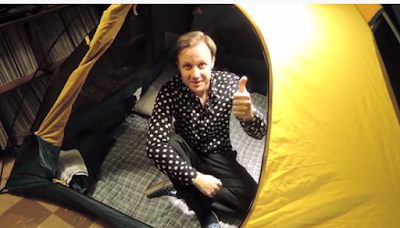 Now when it comes to ideas, Tim is expedient. When it comes to albums…, well, he’s only just now readying the release of his 3rd proper solo album, Amber Lantern. The singer/songwriter is known around the state for his tenure with poignancy-cultivating, gothic-Americana conjuring, folk-rock dynamos in the Great Lakes Myth Society.

Later, on 2011’s New Britton Sound, Tim got cinematic, ostensibly giving aural texture to the wistful fogs of nostalgia and the quieting exhilarations of deep contemplations. His lyrics often sound like the kind of words that have been ricocheting around in someone’s head for almost-too-long, ready to come out. His voice, even if recounting an episode of woe, crackles with a dulcet timbre that sounds like reprieved, the heavy sighed sound of healing.

So, the news here is that Tim Monger is going to be releasing his third album later this year, (hopefully around early autumn). But that all depends on a recently launched kickstarter campaign.

And since we wound up really chopping it up over the course of this interview, I’m going to set aside my own purple-splashed adjectives about his music and go straight to the Q&A.

Timothy Monger : Outside The Venue from Mostly Midwest on Vimeo.

Tim, when you go to your own mind palace and sort of reflect on the way you’ve continually approached songwriting? Have there been some recent influences or experiences that have shifted that approach?
How did you know about my Mind Palace? Maybe you were simply making a classic Sherlock Holmes reference, but I actually have a tent set up in my basement that I refer to as my Mind Palace where I sometimes like to hang out, write, and contemplate.

My DNA skews me toward being a nostalgic and sentimental type of person which can make certain emotions enjoyably richer, but is also sometimes detrimental to my happiness. On past albums, I've admittedly leaned on a certain feeling of wistfulness which seems to flow easily into my music. If I'm being honest, it's probably my default setting as a songwriter and it can take a conscious effort for me to begin from a different starting point.

What did you want to do this time, though, with Amber Lantern?
I wanted Amber Lantern to include songs that were a bit more present. I wanted to better represent what I was feeling when I wrote the songs rather than looking back at past selves. I still tend to romanticize my subjects and there is a pretty diverse swath of song styles on the album, but overall I feel like I've grown quite a bit since my last release.

I seem to recall a heightened meticulousness to the way you were crafting each song during the production of New Britton Sound. Talk about what winds up dominating your attention most when it comes to finalizing a song. What’s the key…? Why toil so much…?
As meticulous as I may sometimes seem, I also rely very much on spontaneity. Songs have to begin somewhere and there's usually some sudden inspirational voltage that begins the process. Some people knock it out in an hour and call it done and there are millions of great songs that have been made that way. I truly wish I knew how to work faster, but my own process usually involves rallying around the initial spark, honing it through numerous revisions, making wrong turns, chasing new sparks generated by correcting wrong turns, and so on.

Every time I think about beginning an album I always tell myself this is going to be my "minimalist record" and by the time I've finished it…four or five years later…, it's something else entirely. Maybe someday I'll do something brutally sparse like Billy Bragg's first album or some sort of hairy, one-take psych album, but my instincts usually lead me toward more detailed pop music with an emphasis on arrangement. When it's all said and done,  I'm almost always happier with the results when I've let the songs decant and fully develop before releasing them. My process for recording hasn't changed a great deal since my last album. I have some nicer gear at home now and I was able to record most of the drum parts at a proper studio which has upped the production value considerably. But I still toil away at each part as I've always done.

You’re going the kickstarter route again to fund Amber Lantern’s completion, promising, if nothing else, tightly-crafted guitar pop with a warm glow… This album has been in the works for the past four years, out of your home studio. And, I could go into further detail about how the overall sound and shape of the album changed many times over the course of those four years, but I’d prefer they just click this link and check out thekickstarter page for themselves… …then, when they return, they can read your response to this question:
Have you gotten into any ethical, philosophical, existential conversations with other musicians about how one makes it work, as it were, in the "music biz"...as an artist without a label, or as an artist seeking a label, or as an artist who has that great work finished but has the big gap toward releasing it…
In regards getting an album over the finish line, there are so many ways to make, release, package, fund, and promote your music. The concern of all the musicians I talk to isn't necessarily about how to make it work in the music business but how to get anyone to hear what you've made. At this point I only know a very small handful of people who make their living as musicians and they work incredibly hard all the time. I have a lot of respect for their perseverance and stamina to stay above water in this ridiculously unforgiving business.

Everyone else (like me) has a day job, gigs on nights and weekends, usually has some sort of home studio set-up, and a ton of great under-promoted songs. You work passionately with the time, resources, and connections you have to try and make soulful, creative work and get it heard by others. Some people are on labels, some release independently, some figure out how to tour, some just play in their basements… everyone's situation is different and there's no wrong or right way to do it. Everyone who records a song generally wants the same thing: to have someone else listen to it and hopefully enjoy or at least appreciate it.

There are naysayers when it comes to crowdfunding, but, as we’ve covered… But that aside, what can you say, as a song-maker, when you see folks step up like this, in this nihilistic digital age of ours, and say, yes, sign-me-up, I want a Tim Monger album!
I wanted my last album to come out on a label, but when that didn't happen, I cautiously turned to crowdfunding. It ended up being a really positive and rewarding experience for me and now, with another album nearly finished, I'm again turning directly to the people who have enjoyed and supported my music in the past. As with every release, I will work hard to extend its reach far beyond my own neighborhood, but it makes sense for me to begin at the ground level with my core fan base. Some of the first people to help me with this funding campaign have been following my music since I was 16. I don't even have words for that kind of long term support. It makes me feel very proud and emotional. Now they're telling their friends where they live to support me and that's how I hope to grow my outreach and get this album released.

Some people have issues with crowdfunding and that's totally fine. I hope they'll still stream or download my album after my other fans have helped me get it released. I've contributed to other campaigns that weren't handled very well and that's just a risk you take in an honor-based model. All it takes is one bad experience to sour someone on crowdfunding. I've sadly seen people approach it with a sense of entitlement, but you have to put a lot of research and planning to make your project worthy of someone's hard-earned money. I get it. I rarely have $20 to throw at groceries, let alone someone else's art. As for my own campaign, all I can promise is that you will get the best album I know how to make and that I will treat anyone who backs my project with the respect and gratitude they deserve. I recognize that, like respect, support is hard to earn and easy to lose.

Tim, I don’t want to talk too much about the album yet. I mean, if they want more hints of what’s coming, they can click here… But in the meantime, let me ask: above all else, is there something, one thing about going on a stage that you've consistently found to be the most fulfilling?
When I have gigs on my calendar, I feel so much more like a complete person. I've been performing regularly since I was 16 and, whatever the venue, I'm genuinely happy to just be singing and playing my guitar somewhere. Maybe that doesn't sound so ambitious, but really, having a gig seems so much better to me than most other things I could be doing on a given night. At the most basic level, I literally just enjoy the physical and emotional sensation of singing for a couple of hours.

What about the songwriting part? The studio part?
As for being in the studio, it's a completely different kind of enjoyment for me. I look forward to the rush of creation, the search for the right arrangement, pushing myself to give the best or most unique performance, or to try something new. I love playing with gear, experimenting, trying wild ideas that will ultimately fail, but should be tried anyway. Recording at home, there's literally nothing to lose except time. You can try anything you want and no one will ever hear it unless you want them to. You can be as bizarre, over-the-top, understated, intense, goofy, or cathartic as you want to be and an amalgam of those things is what often leads to the desired end result.

Tim Monger wants to pour his heart out to you and maybe help reveal to you the common mysteries of the human experience, but he’s doing so without the financial backing of a label… If you feel like helping, then click here.