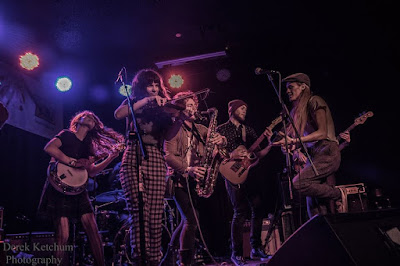 Olivia Mainville is in a basement filled with music and loud things.

The 20-year-old Grand Rapids/Holland-area singer/songwriter talks to me while packing up for a road trip up to Oscada County, and Andy Fettig, Bleu Quick and Ian Burke, the three steadiest members of her somewhat elastic band, The Aquatic Troupe, are audibly discussing the weekend ahead, closing up cases for trombones and a stand-up bass. Oh, and there will be an accordion on this tour...

Mainville wasn't taught the same rules as most academic musicians. As a teenager, she independently assigned herself her own curriculum, burrowing into her parents basement and surrounding herself with several unique instruments, proceeding to listen to music, experiment with music, or write her own music for long tracts of time. She admits she missed some actual school during these alternative study courses.

Mainville began weaving her way into the local music scene in Grand Rapids at a very young age. The well-established Beulah-born Americana outfit The Accidentals took Mainville "under their wing," when she was 14 and just learning how to write her own music. (She'd already been playing in the school orchestra at this point). "(The Accidentals) taught me a lot about touring and gigging, and basically everything that I would need to know, all the etiquette it required..."


“But, yeah, I never went to any kind of music school. I stopped traditional schooling and just stayed in my basement and played a bunch of music, just practicing all day. Before I went to my first actual music festival, in 8th grade, I had never been to any big festivals or listened to music all that much; it was really need, though, and it made me want to seriously pursue music.”

What drew Mainville to music was the energy she saw on those stages at that first festival, there was exuberance resonating between the players and feeding out into the crowd. It was an exchange of celebratory vibes, of subtly spry and coolly dynamic – that…is what you hear captured on Maybe The Saddest Thing and continually see during the Aquatic Troupe’s live performances.

I ask Mainville what some of her key influences were and she admits that she never had any of those all-time favorite bands or artists like most of us do. The Accidentals were integral in her development, as were the Toronto-based Tequila Mockingbird Orchestra, and she admits an affinity for Django Reinhardt’s jazz guitar styling. That said, I think what Mainville and her Troupe are adept at is infusing their inherently whimsical, soaring folk songs with a necessary liveliness. It’s magnificent spunk, it’s graceful boldness, it’s not worrying about what’s formal and finding what feels and sounds right. And that’s usually pretty damn rousing…

“I loved seeing the audience having fun, watching (live music at a festival),” Mainville says, recalling that inspirational moment. “And, I know how I feel when I watch a show that's really entertaining - it's the coolest thing. I’ve always loved the fact that you can just keep striving to get better and better on a stage, as a performer; it’s something that you can keep doing and keep getting better at it. It’s not like you reach your full potential with it at some point. You can only get better! The fact that you can keep making things differently through music, or making (a song) more interesting all the time is what's intriguing to me about it…”

This band has been hitting the road on a regular monthly basis, roaming all around the state (and beyond). Here's a glimpse of their upcoming shows in June. If the Aquatic Troupe should ever come closer to the SE Michigan or Greater Metro Detroit area, you can anticipate guest appearances from our local young folk luminaries like Libby DeCamp, ISLÁ and/or Jack & The Bear, each of whom have been (and still continue to be, more or less) members of Mainville's band.