A Dialogue -with Music

If you aren't turned on, then turn away.

So it goes.
The Internet's marvelous and ill-mannered museum of content, CONTENT... blurs by the clicker, the scroller, the digital seeker with such quaking accessibility - why waste time if a work is over-staying its welcome with its verbosity or encumbering you with over-conceptualization, or worse, insulting your intelligence altogether... a vapid wolf, recycling tried and true form but shrouded in the sheep's wool of hipster-christened credibility.

My long-winded point: blogger is broken. I'm dubious of the effectiveness of posting quick videos and MP3s to the masses, anymore - now that, in a way, that's what Rolling Stone and Spin have reverted to by assembling lists of "songs you must download right now!" But then what? How many of those songs, of those bands, actually stick with you, become new favorites or make it onto your special mix tapes?

Isn't it more worthwhile when your admiration is earned?

This lil blog, here is guilty, or at least dabbles (as it will, below) with posting the quickies/ i.e. quick news updates: 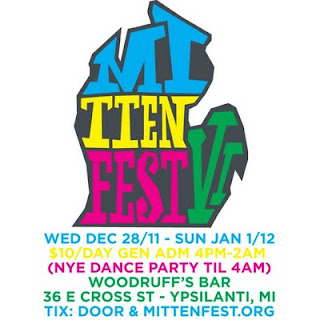 Say, for example - this item:

This is one of the most vital of this state's (this scene's) "fests." It can be fraught with musical eureka-moments, live, on-stage chemical reactions and creative/stylistic realizations(/revelations) for those performing as well as those attending.

Five Days. Fifty-some-odd bands. A fair-sized space made disarmingly welcoming with its body-heat warmth during what can be a dagger-chilled, frost-numbed time of the year (especially during a smoke-break under a sun-less midnight sky).

Yes, yes...
news items aside... I hope you'll allow me to self-delude myself into (stubbornly) clinging to the old guard's style of shrewd unpacking of works (CONTENT)... in the face of mad-world blogs, blogs, blogs' posting a video, with two sentences acrobatically summarizing a new hot band's new hot single into a series of sugary/sardonic slogans.

Because aren't we a generation that just tunes out after 20 seconds if we're not digging it?

Oh? El-P released an uncensored version of that song that I heard on Adult Swim for 20 seconds? Cool... ("Drones Over BKLYN") I'll check it out...

Because then I feel disingenuous when I make a wholehearted attempt to prop a band like Philly's War On Drugs, by posting some videos.

This is a project currently spearheaded by songwriter Adam Granduciel, originally founded as a duo years back with Kurt Vile. Wagonwheel Blues was their debut for Secretly Canadian - and it charmed me from the get-go with ditties (like the one below)


...that would display the early gestations of both Vile and Granduciel's penchants for a more psychedelic rock's shambling upon the troubador vibe, the twang of Americana with the fuzz of shoegaze and sort of head-swimming haze of dream pop.

With a new line up, and a new album (Slave Ambient), The War On Drugs are currently On The Road ~ stopping by here, (in Ann Arbor) on August 25th (the Blind Pig)

Here's a sample of the new stuff:

The War on Drugs - "Come to the City" (Official Music Video) from Urban Outfitters on Vimeo.

But, I'm growing ever-more self-conscious about the quick-and-dirty aspect of that - the degredation of the art form of writing thoughtful reviews, flourished by the emotions conjured (be they positive or negative, mesmeric or boring) by the work-in-question.

It's just so easy in the internet age -

Blogs bursting at the seems to show you what they think is cool!

It's time saving, sure, but it's also a bit fish-in-a-barrel-esque - Some day I'll find the time to expound upon Little Blu House, the Fat Possum release by Unknown Mortal Orchestra - A band, I'll admit, was one of the few to "stick" in my library, after I scanned them in the glossy pages of Spin...

~But still
at least for a few more months, I'll allow myself to believe in the literary power, still yet remaining, in a music review - that power to actually stir curiosity in the reader to seek it out. (I"ll be rambling about Malkmus asap... and Prussia? Poor English? Of course that'll be rambled and ruminated upon...)

~~~
In any case, if you're still reading this... I'll do one more quickie news bite:
There's a free Poetry in the Park event this Thursday evening at 7pm Remembering Gil-Scott Heron with acoustic performances - at the Charles H. Wright Museum

Another example of the Internet's eerieness? Or is it just surreal? That Heron's famous "The Revolution Will Not Be Televised" is streamed on YouTube with adds from Coca Cola - clashing with the famous lyric: "The Revolution will not be brought to you by..."