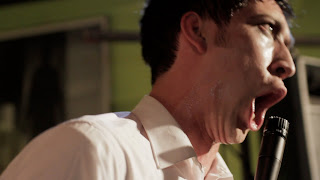 "I am a tattooer by trade, which is my 2nd- dream job. The 1st is the reason why you're interviewing me..." (-guitarist, Matt Paw)

When they first bounded their shaggy selves out from the cluttered cavern of their Eastern Market loft and into the clearing for the scene's scrutiny, they were, perhaps prematurely, tagged with laying down a gypsy-punk sorta thing...

In fact, "Gogol Bordello made me want to play music again," Paw admitted. But, also, "Dick Dale, the Ventures, they're sweet. Zappa too and Curtis Mayfield was like my Godfather."

As part of the crowded line up for the recent live local music documentary, Urgh: A Detorit Music War, they did a fine enough job distingushing themselves amongst 17 other performers, each with aiming for a stop-at-nothing / healthily competitive drive for topping each other's vigor. (One would have to, with all those cameras spurring you on...)


And that's the thing ~ this band, despite the fact that they rock an accordion and mash a danceable vibe into a punk rock blender ~ is still yet becoming whatever it's going to be...gypsy, punk, or even some radical new kind of lounge-apt acid jazz.

Through tattooing, said Paw, he can change people's lives (not just their epidermis) - and that the goal is to acheive that through music, also. "...to be a positive service and effect the humans and world around me in a positve way so your love will outlive yourself..."

This band was born in a busking manner, through a vibe that blended "rag-tag"-ish, rusted-folk and Tin Pan Alley zazz, emanating out on the sidewalk near Suppino's Pizza (where almost-half-the-band day-jobs), complete a gut-bucket bass.


Whatever it's wound up being, (after one EP) is, if nothing else, "fast," says Leo McWilliams. "That accordion must be like 40 lbs. and Neal (Parks, drummer) just goes crazy. I never know if I'm pushing or pulling. (But), I'm definitely dancing."

Parks has a favorite memory that he thinks sums up his philosophy on life (and perhaps a fine enough perception of Pink Lightning). Traveling with a friend, they decided to test the rumor/myth that one could walk around the streets of downtown Las Vegas with open alcohol containers. They stopped in and bought the only cold thing they could find - a bottle of Chardonnay - and uncorked it, sipping it from a seated spot on the curb. 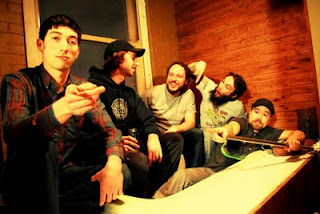 "...once we mustered the courage to continue our walk with some wine, we got about 30 ft from where we were sitting and a random stranger passing by had just enough time to say: '...give 'em hell, boys.' ...so we did."

Sure, they're motley. Singer Chris Butterfield cut his teeth on karaoke and brandishes a verdant reverence for provocative envelope-pushing stand-up comics, but then you have professionally trained players like bassist Everette Rinehart, who was taking music theory lessons and joining jazz bands before he could drive. While Rinehart honed his fluidity through jam band experiences at Virginia Tech, he eventually started the fateful instrumentla busking band (agreed upon at the commencement of a volleyball game on Wayne State's campus).

-"Stage presence...showmanship is the bottom line." 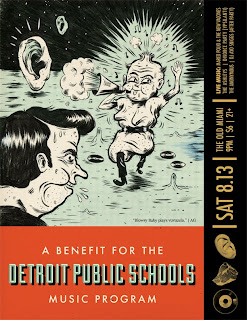 Butterfield, after his collaborations with Fur's Michael O'Connor, Pewter Cub/Duende's Scott Sanford and filmmaker Brandon Walley via the Urgh organizing, is getting into show promotion. His first night is August 13 at The Old Miami~ a benefit concert for Detroit Public Schools music program featuring Marco Polio & the New Vaccines, The Ashleys, Divorce Party, The Anonymous and DJ Ayo Sniggs.

Mark your calendars for "relatively soon" in terms of a release date for an LP (currently in post-production). Tour is also being discussed, they're still "waiting to hear back from The Edge."

Also, McWilliams is considering the addition of a keytar -as soon as possible.