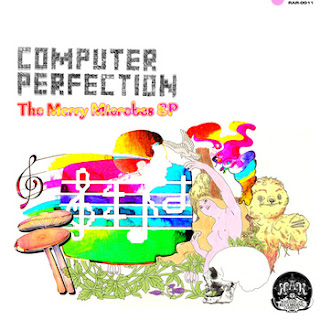 
The Detroit quintet forges five summer jams of intergalactic chamber pop on their most recent release, indulging a wayfarer's whimsicality exemplified best via its synth-percolated, drum slamming 13-minute-long-6-movement trip-out of a closer.

That this is the soundtrack to some kind of journey is palpable in the swirling synthesizer's mimicry of a revving UFO's tubular engines, with airy feedback rising along with us as we ascend through the celestian buzzing the opening "Ivan, I Know." Gene and Bem hold it down, harmonically, just as well as newcomer Alex (on drums) holds it down with a soulful, clattering punch. Stevers finds just enough room to flourish a grinning groove on his bass, oozing through the porous squalls of Burgundy's warbling synthesizers. Gene's guitar, meanwhile, gets to flex its muscle via a growling hook across the cosmic waltz of "Proxima Pt 2."

Then there's this diddy...

A playful looping synth prance over hip/hop beats and a marching bass line with vocals that almost feel like they're playing a game of tag with the listener. Sunny elements pour in for this mild house-party vibe, hand-claps and a warm, wavy organ... until, just like any good time, its over sooner than it should be and somewhat abruptly...

~
Meanwhile, Match By Match's American Crowbar came out about two weeks ago... 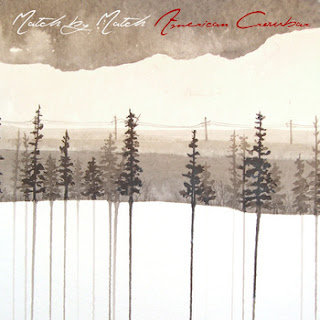 Initially, I don't wanna call what this duo does merely folk, nor do I wanna say something like camber-pop. Many of their compositions are so damned precious and ornate that it just exhibits what must be called "orchestral..." Indeed, there's four times as many instruments dressing these rustling ballads of Americana/melancholia as there are permanent members (though this production, set down at Ann Arbor's Backseat Studios, features many cameos). But it's not just the violin or french horn or warm harmonies - it feels "orchestral" just by dint of its poignancy, like the pristine pianos spirknling down over autumnal strings and achey/wispy serenades on "Dead Dead Stars." Indeed, much of American Crowbar feel best suited to be heard within an old theatre house, soaking into red velvet curtains and resonating off of dusty, worn woodwork.

They seem to be following steadily behind the schools of Monger and Bathgate - maybe not as earthy or rousing as the former or as-yet-experimental and cathartic as the latter - but striking their own path, girded by the male/female harmonization and inclination for evocative crescendos, shimmering acoustic guitars and chilly strings... Dig deep enough into the story behind these two troubadors (and their sound) and comparisons to serindipitous story and bittersweet sounds of Once is hard to resist.
~

Car City Records, our east-side trove of dusty treasures, is closing its doors.

(from the internet)~ "After moving out of state four years ago, the owner finds it difficult to give the business the attention it deserves. Next two months, please stop by for a last chance to get your finger tips dirty as we spell off inventory at bargain/basement prices. Starting on Friday, Aug 5, all used LPs, CDs, 45's, cassettes, DVDs, books, 78's, 8-tracks, etc in the store are being sold at 50% off marked price!!! New LPs and CDs are available for $3 off marked price..."