Checking in, West-of-Detroit, with some our Washtenaw music-makers:

And onto this month's musing on the cassette-revival and how it might (or might not) shape music production as well as collective music experience. 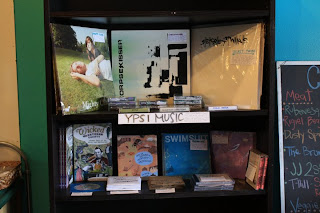 This month's "rock" column from the Ann Arbor Current

I can’t see them coming back anytime soon. Then again, perhaps I shouldn’t speak too soon. They said the same thing about vinyl in the mid-90’s, but now most bands consider it a sort of pinnacle, or ideal preference; a once-discounted medium regains universal recognition for its elegance and grandeur. Now cassettes, they might be punk rock.

Over the last year or so, the same thing has been happening for cassettes, sort of. While the hip/hop community has still kept the “mix-tape” tradition strong throughout the last decade, it seems to be catching on as a popular practice for releasing “LPs” in the enclaves of rock/indie/noise/and punk music.

Far from a trend, cassette releases are seen as the inevitable result of the Internet’s glorious/lawless industry shake-up that inevitably devalued music’s physical product – thereby initially spurring some bands to release their songs for free (as countless Arbor/Ypsi bands do, via Bandcamp). But cassette tapes are considerably inexpensive to produce and, at first, yes, beheld as a novelty or at least nostalgic.

Such is the new strange norm for local musicians; the expectation of “fresh ears,” i.e. a potential audience coming to your record release performance having not yet heard the very songs you’re “releasing” on a physical format, is as outdated as the 8-Track. Vaudevillian-punk-strung bluegrass rockers Black Jake & the Carnies had their songs for their newest LP, Sundry Mayhems up and streaming (on bandcamp) more than a week before their wild Woodruff’s show.

The romantic purist in me, the one who still has room for revering auditory artistry of engineers like Phil Spector or meticulous crafters like Brian Wilson, or even for local sound-sculptors Brandon Wiard, Jim Roll or Geoff Michael, wonders if devaluation of product has triggered depreciation of “the experience” of listening to records. Some may say – ‘Duh, that happened long ago; just go out to the show and get the rush and roll of the live essence!’ Or some may say – ‘Not yet. Cassette or MP3, it’s still rock n roll to me.’

Things coming up: The 3rd Annual Michigan Roots Jamboree will be the place for bluegrass, folk, some jazz, some blues and a considerable amount of rock n roll. Look for: sublimely stark and richly lyrical folk rock quartet Frontier Ruckus; the healthily raucous fuzz-fire rock preservationists Drunken Barn Dance; the eclectic world-music tapping swing/jazz-blends of progressive rock-tinged groups like Ella Riot (formerly My Dear Disco), NOMO and October Babies. Black Jake & the Carnies are also on this bill of more than 20 bands –spread across two days (with camping), hosted by the non-profit Roots Jamboree group, at Ypsi’s Riverside Park.

With room to spare, find engaging listening experiences via Little Island Lake’s glistening brand of banjo-meets-electric-guitar under smooth, airy harmonies; or get rough and tumbled by the post-hardcore/math-rock musings of Graders; or go to a dreamily-fuzzed soul/brit-pop realm with Jeffrey Freer’s online Demo Party.