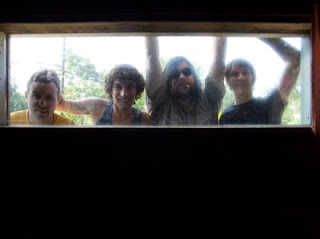 Music line up....
...featuring, among others - the Sugarcoats
(Listen to their Cass and Italy singles, respectively)
(photo cred: Ruth K. Synowiec) 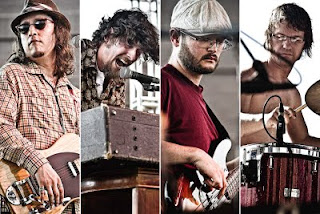 Disturb. Travel. Transfer.
Reflecting so thoroughly that I crash back on myself.
All stirred up…
Getting misty in northern Michigan, traipsing private roads spilled with the tawny turquoise glow of a sweet, serene sunrise, squinting over at those begrudged grime-shirted scrapers and knee-padded painters beautifying the garish, boxy homes owned by those of the beachfront property privileged, …front doors locked tight behind mailboxes staring out with haughty obsolescence at the frothy shore.

And then trying, trying still, to channel detachment into a new resolve
A new thing – a confident bewilderment, a gaze off into the new weird wilds and unclear paths
Steady footing has only lead to a worn down whimsy – dreams diluted and feeling as scattered as the flakes of seaweed and chipped shells of zebra mussels that wash up at my feet.
As the sun rises higher...
(~~~new tracks and ruminations to dig, via Estuaries, which inevitably inspired this poetic rant~~~)

No, no…you pack your bags back up. You listen to that song again and it feels, not new, but like it once did before, long ago.

And you realize, despite the hard facts of anatomy that say otherwise, that you’re not like water – not made to flow and splash in similar fashion
not like the waves of tourist-laden Torch Lake, but more attuned to the whipping rebound of a sound wave, a theremin’s howl or a moog’s sonic slither… resonating, oscillating, humming pensively then yowling with proud, bombastic exertion.

There should be no fear of the crest, of the crash, of the next batch of kids and their waxy boards raring to ride atop the next new nifty need, the next fascination, the next wave, new wave, no wave or now-wave…

No one sees the effects until years later, anyhow,
and meanwhile we just get so antsy for definition, for the browser to load, for the page to print, -just for a communicated meaning of what we’ve all been rolling for, rolling towards – Why be a water wave – when all you’d really accomplish is erosion…

~~So ebb and flow like the warbling coil of sound – sing yourself out – undulate at lower velocities when you need to and flit up when your veins start surging, again…

~~Rich baby boomers jog past me as I sit at the edge of the road, watching the water. Sport Utility Vehicles honk as they whiz by. And I just continue, thoroughly, scrupulously…and now, resplendently… reflecting upon myself.

The tide starts coming in. The pulse, the voltage, the oscillation – gets dialed up.
Disturbed. Synthesized. Harmonized.


Washed Out has been testing the waters to see if the internet hipsters are still afraid of what-resembles-what-used-to-be-known-as-chill-wave, with new stuff (and a show, at the Majestic in Detroit, Sept 16 @ the Ingenuity Fest and 17 @ the Majestic Theatre): Washed Out - "Eyes Be Closed"