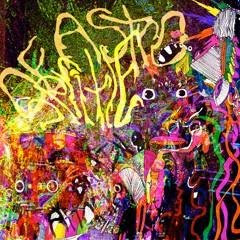 In 2007, a 21-year-old with a laptop, squirming dance moves and a voice like wailed sunshine, stirred considerable interest for his performance, -mixed into a late summer's local music fest that was hosted by the now-defunct online culture zine, Detour.

This fest -coinciding (if you will) with the "birth" of Deastro -was, ostensibly, the primordial model, in vibe, size, date and venue, for what is now known as The Fucking Awesome Fest (8/10 -through- 8/13 throughout the Majestic Theatre).

And...the electronic music composer, known as Deastro, came to be one of the more dynamic scene-sensations of recent memory, initially spurred by his prolific output, then roiled by the amplification of cynical blog posters wielding long-knives from behind the shielded anonymity of computer screens. 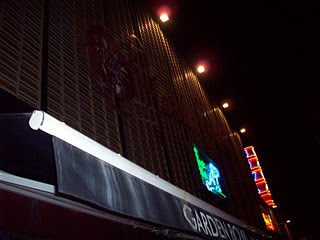 Deastro, the songwriter whose also been known, if briefly, as SX-8 Columbia and/or Mirror Image... still seems possessed with positivism. "Stay excited about stuff, for sure," he incanted, in closing.

Having warmed back up via a solo-set opening for Matthew Dear last week, he's now readying a new (however transient or permanent) line up of colalborators to perform this week for the 3rd Fucking Awesome Fest ~ tacitly commemorating five years of churning out music, here in Michigan and out to the world (via a tenure under Ghostly International in 2008/2009).

"It's gotten to a different point for me, now," he said, hinting, indeterminately, at the latest Deastro-incarnation's tilt toward rawer, political-tinged punk rock. "As I'm getting older, (I see) there's so much other great music out there that it makes you change the way you write."

Mirror Image -Let Me Go by DC/Milo (a long lost Deastro demo and fleeting favorite of mine...)

After five years in Detroit, "...nothing's really changed. It's, just, mainly been about the same things: -making weird music, jamming with friends, and trying to find a place where you fit in..."

Deastro went from a solo-act, to a computer and live drums hybrid, to a full on space-rock realization, and back down to just one--having recently drowned the sounds in heavy atmospherics and noise experimentation, whilst also fostering a reverence for no-wave, drone and avant-dance via participation with Something Cold and the burgeoning noise-community.

"There's tons of good bands coming from that, (the noise bands have) an amazing music scene, here. I really got into that, it was a really cool thing. I think that there are bands, like Aphasiacs, that are just gonna get better and even Wolf Eyes they're still very active in organizing shows and creating a DIY-scene in Detroit."

DIY, indeed... Such can be the struggle to maintain motivation in the current climate (socio-economical or otherwise) for upcoming musicians. "You gotta do your own thing on the side," came Deastro's recent reflection, as he still slogs it out via an often 12-hour work day, doing maintenance for supermarkets. "If you really wanna do music these days, you can't expect to get paid for it, rather that can't be your goal, at least if you wanna make music you like..."

"I'm not trying to sell anything," he said, having gone through a few nationwide tours to promote an LP (Moondagger) in 2009. "I just wanna make stuff people really enjoy, but also just, kinda, kicks a bit, ya know?"

While the Moondagger whirlwind died down, so did Deastro (as a four-piece), leading into a disbanding and the songwriter's eventual retreat into a more behind-the-scenes role of show promotion (via the C.A.I.D.).

"I think I was just tired, more than anything, just being a little exhausted from a lot of things. I think everyone goes through a period in their lives where everything falls apart for a minute, but then winds up having fallen apart for a good reason. It causes you to question everything. Then, once you restart, you find out some of them were right and some of them were wrong and at the end you come out a better person...hopefully...I'm not claiming I am, but..."

The key for Deastro seems to be continuing to foster community. "(I'm) just trying to hopefully get my shit together so I can help out younger kids, coming up, doing their thing, 'cuz that's the way it works. There were older guys in Detroit that have always helped me out. It's a cool place to be where you can be making music and you can hook up bands you like with shows and bring other bands into town. I really wanna do that, and I'm just figuring out how to do it right."

"I'm really doing this, making music, still, to meet people. There was a point in my life where I feel like I lost that and got bummed out about some things, it got me down. The things that you go through, living in the city, in the scene, making friends, they have an impact on a bunch of other people at the same time."

"Everyone's kinda in it together, the whole thing, ya know? It's good to see and think with a clear head again about life and about, just, what's important; I think that's mainly: loving people, loving your friends, learning how to be good to people and just knowing that life is definitely sacred, and people are really important. You can't really think too much about yourself."

The current incarnation of Deastro remains amorphous, save for a drift towards punk and a return to guitar-bass-drums.