It's the weekend...what are you doing on the Internet?

Since the most recent post mused on Detroit's current psyche-rock scene - it'd be fitting to include Fuxa -initially an experimetnal post-rock duo that was tied to comparable progenitors of modern-motown-psyche, Windy & Carl, back in the mid-90's -and continues to record and tour as a collective revolving around founding member Randall Nieman (who recently moved back here after spending some time working on music in New York).

Recently, Nieman's been working on translating his ambient space-rock signatures to the more primal scrapes of the Stooges:


Which leads me into this:

~
Hunx & his Punx~~ blushable bubble-gum psyche-pop belted by a flamboyant gay male signer, backed by an all-girl group, recently released Too Young To Be In Love - an inaugeral collaboration of songwriter Seth Bogart and his accomapnying Punkettes. Here's the single via video, given a grainy cinematic realization tumbling through a surreal basement prom, provoked by ghastly severed hands, ears and noses...


Hunx hits the Lager House - with local openers Swimsuit and the Pizazz - on September 15th. 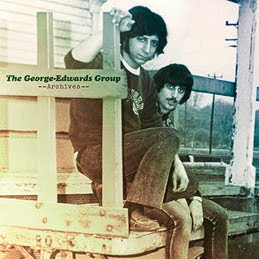 Also, while you're here, you can learn about the latest sonic gem excavated by Chicago-based Drag City. You'll recall two-ish years ago, that they did justice to the recordings of Detroit's long-lost garage-rock power trio Death... ...This month, the label let's the light shine on another unheralded obscurity forged in the Motor City ~ the fantastic freakdom and synth-streaked psychedelia of the George-Edward Group.

Edward Bailan on guitar and Raymond George on percussion, this pair cut their teeth performing alongside Detroit's now-legendary psyche and hard-rock scenesters of the late 60's, from the Rationals, the Frost and Ted Nugent. Monastic study of the staples: Beatles, Cream, Rolling Stones, Jimi Hendrix, but also Traffic and Jethro Tull). Remaining shrouded in studio secrecy, the duo began as a strict recording project in the early 70's (and crafted their quintessential 38:38, here in Detroit at their own Sine Wave Studio,); and as that decade progressed, they became particularly smitten with studio technique and equipment, (notably on Drag City's forthcoming Archives, they flourish their penchant for the Moog synthesizer and multi-tracking tape recorders).

Archives (out, Aug 23rd -released by DC and Galactic Zoo) displays the duo's sensibility for hazy, psyche-tinged baroque pop, dazzled with day-dreamy melodies and strutting pianos, but they'd been marked by experimental murkiness that formed the early days of prog--from pre-Dark Side Pink Floyd, to King Crimson, thus what might seem like wiffs of Strawberry Fields or some waltzy, strummy AM Pop trip is given an surreal, synth-infused iridescence, accentuated even further by buzzy guitar storms under disarmingly pretty and poignant harmonization.