"The scene here is astonishing and I almost feel like the people in it (both bands and audience) don't realize how amazing it is."
We round out the humble, somewhat arbitrary, quasi-snapshot sample of the Ypsi/Arbor music community - with the profile of the 5th band on an upcoming line up at Woodruff's (with Lake Folk, Long Whisker, Team Ethic, Gun Lake) and, now...

MATCH BY MATCH
Sounds: well, it feels like folk, only, given an air of the ornate with the opulent instrumentation of accordion/piano/ukulele - but nothing dirgey or day-dreamy - fervent acoustic guitars keep things stirring under passionate vocals.

The band (Gray Bouchard--guitar/vocals & Melissa Coppola--accordion/ukulele/piano/vocals) met on Chatroulette, about a year ago, "entirely by accident." With Coppola in Ann Arbor and Bouchard in Boston at that time, they were randomly paired up on the singles' site, both having logged on out of boredom in the first place. 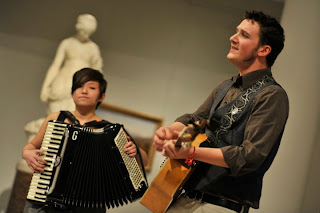 "Both of us had our instruments with us," Bouchard said, "(me: guitar, her: piano) and we just sort of played songs and talked about music and that was the start of it."

Yes, their instrumentation is ostensibly folk (guitar, piano and accordion) and, yes, they have "felt a lot of love here (AA) in the folk scene," but with their emphasis on melodies, bouyant choruses, and a nice amount of breezy hooks would welcome the 'pop/rock' sensibility.

"Mostly, our songs are sing-along melodies and hooks with small, weird tweaks to them to give it personality," Bouchard said. "Usually their love songs to things you normally wouldn't hear love songs about: ...vampires, 19th century railroad workers, the end of the world, Gods and Monsters, lost homes...etc"

Bouchard came to Ann Arbor in October, knowing only Coppola, who, herself, is not a native (from NJ) and was studying at U-M. Bouchard needed a break from Boston. Plus, the cheap rent "helps the creative process immensely."

Bouchard said Match by Match has been given a warm reception from the music scene here, more so than he's experienced in a decade's worth of playing music. After just a few shows, they started getting recognized around town and invited to the stalwart folk-venue, the Ark.

"Having lived in both Boston and New York City, the difference is almost indescribable. There's a level of genuine support and openness that doesn't exist in other places. A community of bands exists, the 'folk' scene, a very loose confederation of guys who play together a bunch: Us, Gun Lake, Lake Folk, The Appleseed Collective, Chris Bathgate, Photographers, and a ton more I'm leaving out...Gun Lake is more straight folk, Bathgate is a singer/songwriter, (We) do a kind of folk-rock thing, Appleseed does Dixieland jazz. We're unified more because of the AA/Ypsi circuit and because we're friendly with each other, more than any musical resemblance,...though, if there were a venn diagram, the little sliver we all share would probably be some version of: 'folk.'"

Bouchard spoke of the scene's "lack of irony and posturing. I've been tossing around the term 'The New Sincerity' to describe what's going on...people are playing the music they like with their hearts 100% in it."

Coming from the east coast, Bouchard posits that the midwest breeds scenes like this: "The people who live here are just psyched on the music that exists next door. As a musician, being able to actually pal around with the other bands is incredbily liberating."

Bouchard, once again, comparing back to the east, exclaims: "People come to shows!!! This seems like such a small victory...but in bigger cities where there's more shows every Friday than you can count or ever go to....Here, people go out just to see who is playing and that's a really amazing thing to see."

But, he admits, "I might just be excited as an outsider." Still, he feels something really powerful and vibrant in the air. The scene "feels on the cusp of breaking and it's exciting."

Match by match play the Ark on 2/21, as part of its Songwriter Showcase. They'll start work on their first full length soon, will continue shows 'round here, plus a summer tour. Bouchard will start booking monthly shows at Ragstock.

Match by Match site.
Posted by jeff milo at 8:59 AM