Last year, pan-Michigan music cultivator and indepdent promoter known as e. hosted a Camp-Out Concert Series in Merrill-MI set Barn called The Last Resort - and it was pretty much what it sounded like, the camp-out part, for both listeners and performers, with a succession of splendid Great Lakes-grown live music. 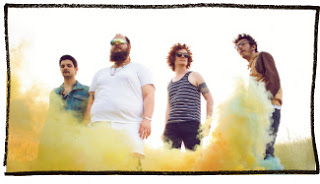 It was shut-down by police and thereby wrought some considerable legal trevails upon these humble booking agents, who had cultivated unconventional and refreshing musical evenings featuring the songs of Ian Saylor, Alan Scheurmann, UltraMark, Those Transatlantics, Marco Polio & the New Vaccines, Gardens and many many more.

On August 15th, the Camp Out Compliation # 2 will be released, with pre-orders starting on August 5th. (More info here). Stay tuned to Whoa-Rangler site for more info and eventual song streams...

...as well as Grand Rapids/Chicago- electro dance-pop quartet Stepdad (whose Ordinaire EP is out this week, pictured above). Get a visual taste of their live show ~here and read about them in Revue Magazine's "Ten to Watch."

...Nathan, along with Stepdad, perform @ Woodruff's in Ypsilanti tonight - with Detroit's Phantasmagoria and Lettercamp.

~
Sunday night @ the Lager House - A bit of stylistic frivolity, sparkled-up-grime and heartfelt pop excursions will echo through the cozy glowing clubhouse vibe of the Lager House. This is the debut of long-rumored artcunt/kunstpunk/bitch band, Nancy Snotra... (likely featuring, at least, Scott Masson of Glossies, Phreddy Wischusen of Golden and filmmaker Katie Barkel...) we'll 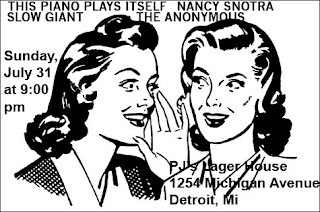 Slow Giant, Anonymous and This Piano Plays Itself will also perform.


News Bites (from out there, in the world):

"Goblin" rap growler Tyler, the Creator, the most prominent delegate of the nefariously captivating hip/hop collective--Odd Future Wolf Gang Kill Them All--let slip in a recent interview with the Guardian (UK) the most appetizingly headline hyperbole fuel: incanting, essentially, that his raw, rad, radioactive group were the new Sex Pistols.

"You really should (hear their records)," wrote the Guardian's Paul Lester. "For sustained and diverse brilliance, only the Wu-Tang Clan, with their numerous side projects come close, and even they weren't this precocious (Odd Future are aged 17-23) or prolific."

So...when hullabaloo hipsters Pitchfork cry out, this morning, via a fleeting headline, that Odd Future are touring North America with the tacit tenseness of Revere warning of the inevitable landing of the British, it reminds me about the gloriously volatile marketing boon (and fracturous boom) birthed by Malcom McClaren strategically sluicing the above-referenced Sex Pistols into the land of guns, bibles and whiskey-- the Deep South would prove to be the infamous punk quartet's introduction to American audiences.


What kinds of (mis)adventures and revelations shall be wrought by OFWGKTA's forthcoming tour? October 16th @ Royal Oak Music Theatre.
~~

In other news:
Vinyl sales are up 55% in the UK, so far this year. Take that, Spotify.