Gruff, guttural expressions, spat out tight and terse as though the orator is holding back from potentially punching you (and thus, doing it with their howling, instead).

Er...true punk should also maybe just do whatever it wants..., but I digress.

Nashville's Useless Eaters seem to understand, on their newest, Zulu (on Gold Tapes) that, as much as they can effectively tumble out a hiss-furled mosh-able anthem, but they also don't shy away from the appealing groove of a new-wave-tinged rhythm, low on the bass and bulled along in a swiftly snaked shimmy. The guitars have a nice reverb-smudged clang and ever present ferocity.

It's actually quite charming - the best of all worlds, be it three-chord Ramonesy chugs, to Fall-like confrontational tear, one hears hints of bellicose hardcore-punk, to more melody-shined new-wave punk, to the more experimental rhythms of that amorphous cult known as post-punk.

They drop by on the 25th - at the Painted Lady - with Twine Time (featuring familiar faces from Kommie Kilpatrick and the Deadbeat Beat) as well as Tyvek's Kevin Boyer. 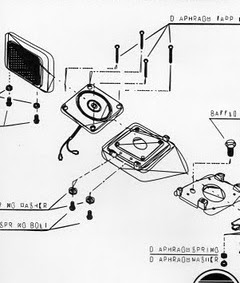 Jeff Nolan's been keeping busy, whether it's with Steve Barman in a collaborative production of MCR(MotorCityRocks) TV, or if it's with Macrame Tiger's Sean Shea, with whom the duo forms a song-sculpting videographic project called SuperFucked. Check out some MCR-TV via this link.

The soundtrack, composed by Shea and Nolan, is soaked with synthy atmospherics and sequenced beats clattering out sturdy grooves and features plenty of guests, including Mister and Ill Ego. The visuals are a kaleidoscope of grainy, over-saturated snippets that seem to span almost the entire 20th century's stock of remarkably random footage,, as far back as a 1910 version of Frankenstein, and as obscure as 1970's infomercials...

It's the kind of party album you put on to pleasantly weird out your guests - and even if they aren't watching, they can hear some interesting electronica collages...
...like this:

DVDs are floating out there, somewhere - more info from Northend.
Posted by jeff milo at 3:46 PM