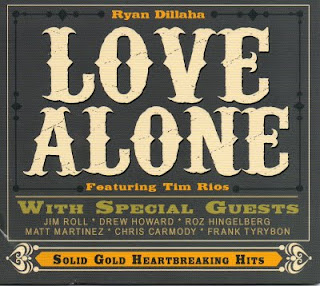 Ryan Dillaha makes it clear before you even open the CD - heart - breaking...hits...

And these honky-tonk-ish waltzes and Americana rustling's hit you right smack dab in the center of that invigorating, cumbersome, whimsical organ behind your rib cage, the one that, when punctured, makes any otherwise rockin' whippoorwill "too blue to fly..."

But as the twanging, shuffling title song suggests, a lonesome-on-lonesome sandwich can often make it right for two lost souls. His resolute nasally warble coos its way through such a relentless relay of eulogies for love; proclamations so poetically pummeling that you may as well be dicing onions while you're out there on your backporch rockin' chair sippin whiskey between gnawed up wheat stalks.

He can take back his sunny days, but hey, those are his, anyway - But that's kinda the point; at least, I feel - as a listener. The greater Detroit area bluegrass songwriter (and Wayne State English instructor) is sort of putting on a clinic of how to craft the ideal heartbreak ballad ~ warmed, if faintly, by the metallic hums and tinny prancing of pedal-steel and mandolins and atmospherically edified by the producing ear of Jim Roll, along with Tim Rios providing harmonic back up vocals and auxillary instrumentation throughout.

The idea migh be something close to~ every song, as he sings, being about one's broken heart. Think about that. If that is the impetus for every ostensible great song - i.e. emotional devastation -and the subsequent search for healing; that, through writing and then singing a song, a hurt soul becomes whole, again? Something like that.

"Detroit City" is the Dilaha song that sticks with me. For me - my heart isn't exactly broken, maybe just a bit numbed, by the disintegration of antiquarian preservation (if even just nostalgia, for the old world). Which is why I'm charmed when Dillaha deals in jukeboxes for his imagery, and talks about how the record player's "needle" will always "find the broken part."

No matter if, "late at night," how "thumping" it gets out there in the city streets, out there on the internet in my case, or out there in the eerie ether of all-powerful iPads, it's still "the radio" ~the comfort of the classics that understands me.

It's possible... "Every song's about your broken heart..." 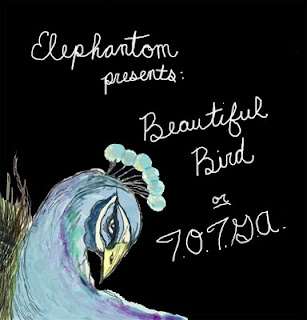 Elephantom, meanwhile, would likely fit that mold as well - a search for catharsis through musical expression ~ their distinction is a considerable range of style and aesthetic.

This up and coming quartet will slide from dreamy acoustic lofters (given an increased vibe of stargazing lullaby with its airy whistling crackled through the choruses)-> straight into a big, booming rock tumbler, girded by whipcracking hooks and sprinkling spacey synthesizers from the ceiling cracks.


It's not that they don't know their sound yet, it's just that they don't have a ...sound. The vocals, even when they're hinting are often bristly, but the steel wool brush is softened by the elegiac beauty of diction, the quintessential melodrama of literate baroque-pop.


Take those melodiously masochistic theatrico-indie-rock composers like maybe a Sunny Day Real Estate or maybe a bit of Bright Eyes - and factor in a whimsy for a smorgasbord of other genres, -a hint of punk, a mashing of rock and a pretty rounding whisk of cursive-lettered folk.

~They have an album release for their latest ^Beautiful Bird, August 11th at the Berkley Front