Houston, We Have a Party 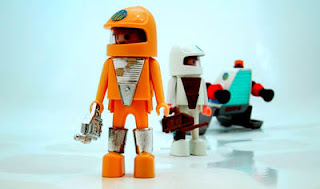 A duo of alien lifeforms abominably spawned into bipedal, flesh organisms from their original rock forms via extensive laboratory experiments, have come to the conclusion that planet earth is a "total shithole."

That doesn't mean they, The Moon Rocks... still don't want to win our admiration ~ in fact, it seems to be one of the remaining goals for their highfalutin intergalactic tour, trekking their own creations (curious musical melding of danceable krautrock kicking rhythms and electro-wrung new-wave grooves) from planet to planet, system to system, --with said-performances having initially commenced as a quasi-scheme to earn enough cosmic capital to finance an escape from Mars (from whence they had initially shipwrecked, along with their two devoted/captive human astronaut/scientists)...

...or something like that. They should be treated, initially, with a similar trepidation mixed between the stiffened distrust and quick bellicosity of the D.C. citizens from Day the Earth Stood Still (51) and the curious, reach-out-and-why-not-touch-em approach of Close Encounters of the Third Kind...

Making peace with these aliens is probably arrived at by merely dancing to the sounds they make...

To see them and hear them - head to Northern Lights Lounge, Aug 6 ~ with one of their captive human explorers will also be performing in a band of his own, known as Space Toilet. ~ Electric Fire Babies and TOMBB will also be on hand to greet the Moon Rocks.
Posted by jeff milo at 6:35 PM