Before Us, Not Behind Us

Dear Whoever
You know who you are...
I told myself I'd write this a month ago. Pardon my tardiness. It's only happening just now.

What scrolls beneath this post is nothing more than a somewhat deluded, often enthusiastic, hot-brained, smart-mouthed, jitter-typed diary written in an attempt to be musical and just-barely-moving, if, possibly, profound.

It's one pair of ears, one healthy pink brain, one pair of eyes and poorly cushioned feet, feeling and hearing its way through what is (and what continues to be) the Detroit music scene. Or, at least, a few chunks of it.

This is the week celebrating America's Independence Day and there's no shortage of hyperbolic hallelujah and haranguing; there's lots of corporate money being spent on studio produced programming streaming on my store-bought television that's readymade to evoke feelings of anger or self-righteousness. That the Founding Fathers sweated it out in weather just a few degrees lower than our own carbon-cooked modern Earth, snug in pantaloons and waistcoats, no less, and unprivileged to electric air-conditioners, penning out the feasibility the boldest of acts: not just revolution, but the declaration of a right to establish our own government, is certainly commendable.

But, that has nothing to do with Detroit music (see: below). Still, though, its enough to get me wistful. Same for you? No? It's that same old slap up side the head asking what have we done? We don't even work on farms. We live by the (face)book and we lily-pad leap from one "event" to the next because it makes the drudgery of our "day-jobs" more tolerable.

What we have done is establish a scene. We're strange allies, cordial and collaborative if still only barely acquainted. but the thing, the peaty patch of stages blooming amps and grounding feet-stomping singers and jumping shredders, has grown into a field, a forest, more life has sprouted, more water's streamed and the passion for local music is a healthy dark green of go-n-get-em-ness, yes yes yes this is the bees knees and I can't believe it's happening right here, right now, right in this weedy backyard.

It wasn't like this five years ago only in the sense that everyone wasn't technologically-blessed into a heightened cognizance of the scene. Networking happens fast, bands happen faster. New songs up from one band as another calls it a day. You feel it all. Whatever pops up becomes a headline-in-form-of-status-update. Sticky notes on the back of your brain so you can chat/query about it later at the bar, when you see the next new band, you ask about the last old band.

We do have this scene though, is what I'm saying. We have something. In some small, yes-deluded way, we are, or at least can be, united.

So it shouldn't be the old and what have we done, in this month's inevitable comparison of modern leaders to the lionized legendary diplomats and musket-gripped farmers of two and a half centuries prior (though it does beg the question of what our Founders would have to say about sleepwalking our way into a anxiety-wracking, corruption-culling scenario where our Banks are "too systemically important" to fail, but, again, that doesn't have to deal with Detroit music)...

No, this blog post trials off with a question, not some cliched refrain^.

What's the next step?

Scholars and writers and various whoever's always say that any Golden Age thrives in the youth of a community. The trick has been staying connected into a scene's idiosyncratic surges long enough to utilize the full potential of it's inspirational-radiation while rising above the demons of disillusionment often symptomatic to competitiveness, or jealousy.

Why are we doing this, ...writing songs and playing them to/for each other, over anything else...

I hate ending on a question. But that leaves the possibility of this not being "the end..." -the last blog post. I'll come back on whenever-a-day for the answer. 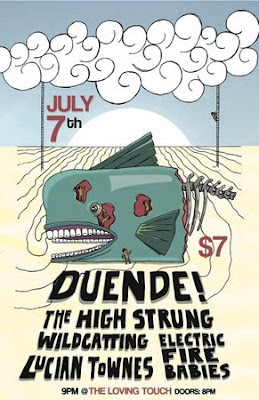 
In the meantime, it's somewhat fitting that I trail off into the image below - as it props a show that features four bands I've been writing about sporadically -for-as-long-as I've been writing this blog. Their progression is documented in dots throughout the streaming diary below...

The Golden Age is before us, not behind us...
-William Shakespeare
Posted by jeff milo at 12:50 PM No comments: