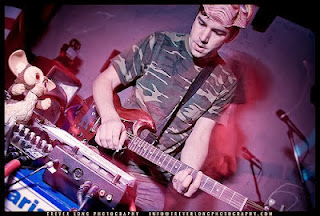 
...shuffling the pages of articles, reviews, columns, zine-snippets and blog-posts that I've written over the last ten years... if there's anyone out there who can claim a good amount of influence upon me, that, they have, indeed, "created a monster..." then it would be the mad scientist known as Lo-Fi Bri - otherwise known as Carjack.

I first got to know Bri through tapes. He had dozens upon dozens of tapes, diaries of his life, really, growing up in the northern Metro area, recording songs with a guitar onto a 4-track between skateboard tricks outside. Teenage-Bri would grow into a shrewd and passionate crate-diver, building up a vinyl collection in the thousands, later spending his college days down in Ohio where he got to see icons like Guided By Voices, Brainiac, Pavement and Sebadoh live, multiple times.

This writer was just starting college when he met this old school Professor. It wasn't long before I was driving back from East Lansing every weekend so I could take up extra curricular classes, with his turntables as my desk and my secondary campus courtyards including the Lager House, 2500 Club, Corktown Tavern, BoHouse, CAID, Jacoby's...

As my ear developed, and my instincts sharpened, I started to branch out on my own. I built my own collection of records and icons and my tastes and sensibilities harmonized into their own signature theme. But if you're asking about the music that first turned me on... It was spun by Bri. Think about that, music listeners... I'm sure 15% of you are preternatural cases of pure music connoisseurs and you got super-cool all on your own. But the rest of you? There's probably one or two or three people who showed you the shit, if you know what I mean...spun you the goods...made a mix of choice jams for you.

It, and by that, I mean, my music-writing, started ten years ago, with this music maven showing me the Detroit scene....and then he picked up a guitar and joined it.

And then I got a laptop and started writing about it.

The latest achievement of Mr. Carjack, as he winds down a busy year honing his craft as a photographer. Expect to see more of Carjack in 2014, including a new video for the song "Damaged."

Here's to Bri on the week of his Birthday. 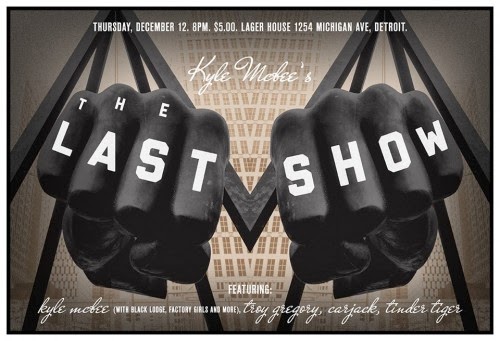 I’ve spent too many of my mornings musing on music and movies made by men and women I’ll never meet and mining just how it equates to your life and to mine.

It’s maddening to presume the meaning of intentional Abstractionists. 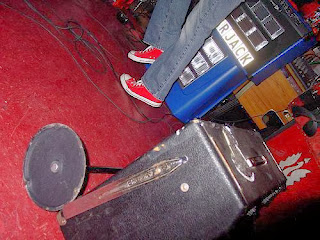 There is a tiny, turbocharged motor inside of me, somewhere deep, in my brain, gut, in my heart, or all three at once, that only music can ignite. This is not unique. But I can detect no other motors within me with comparable horsepower. These parts of me, me-entirely, gets fired up in just this one way, this eye-opening, limb-loosening way, this muscle-shocking, chest-thumping way, this this is just how I am feeling right now way...

Transcendence is too strong a word. It's a go-to cliche for a lot of waxing-poets prying apart their music-loving organs to see what's inside, to see just what it is that responds to melody, to percussion, to psychotic guitars, to sung/screamed vocals. Is it chemical? Is it primal? What gets you going?

More importantly, why question it...I risk finding out just why it moves me so, robbing it of its enchantment. Deluding it. I'd become one of those souls convinced they don't need to listen to music.

Well, Jeff, is it some magical motivator or is it just compulsive?


No, Jeff, it isn't that I yearn for constant noise, some distracting sound... These notes are bent bewitchingly, these melodies are like hypnoses, these songs are sirens.


So, Jeff, they put you under, like a spell, render you away from reality... A numbing agent?


More like a depressurization chamber, Jeff. It is a process of transformation. The sounds stun me, but then simultaneously act as a key to the door of reality's chamber, busts it open into a sunnier space that is away from the grays and the doldrums and the daily drivers and gives me new limbs and new lungs and tenderized ear drums.

This is a necessary dialogue to have with oneself: What music means to you...Or what role it has played and continues to play in your life. How do you ...use it? How does it affect you...

Because "internet music culture" is a legitimate, troubling, freeing, freaky phenomenon. Should the making-of music and the enjoying-of music be appreciated, respected, as a tradition that we, the post millennial 20-and-30-somethings of the land, have inherited? The meaning of music, to "this culture" and the next culture of teen-somethings coming up behind us, should be explored.


"You asked about music and why I make it," singer/songwriter/keyboardist Natasha Beste responded to my query. Locals will know her as the dynamic frontwoman of Odd Hours and part of the production crew in Gold House Media. "Do we even need anyone to make music anymore? Is it worth it? Is it dead? What is music to anyone anymore anyways? And...so, why am I talking about my mom?"

Her explanation was a story.

Beste was raised by her grandparents from the earliest age, with her mother, just 20, single and suffering from mental mental disorder.

"Growing up, I saw my mom function off-and-on," says Beste. Her mother worked as a model and hair dresser. "When she'd visit, she'd dress me up like a doll, dye my hair pink, put make-up on me. She'd play new-wave and pop music and complain how Madonna stole her look."

Beste, early as grade school, consciously appreciated her "background." Part German (Grandpa), part Italian (Grandma), part Russian (father), and part Punk-Rock (mom). She never got to meet her father until she was 18, though, and pursued pieces of the story throughout her teenage years.

As a teenager, Beste gravitated to the music, films and fashions of her mother. She played piano and told Beste that she was in a band when she was a teenager called the Chocolate Fingernails. "Everything about her was exotic and interesting. Everything was 'cool.' But everything about her was frustrating, maddening, talking to herself and starting fights with my grandparents."

Beste struggled with this; anger and repulsion and embarrassment of her mother, mixed up with an aching to connect with her. "I realized later I started molding myself into what she could have been or what I thought she should have become."

At seven-years-old, Beste already knew she watned to be a performer. To keep her inspirations up, she documented everything. Everything! As far as writing down names of everyone she talked to in school, documenting their views, recording sounds of each passing season with a stationed outdoor tape recorder. She was visualizing, recording and soundtracking her own BioPic film.

"As a teen, I realized how music allows you to revisit feelings and become emotionally charged. You could literately make things up and create or conjure emotions. You could influence others and bring them into a world you created. Same with film. That's why I'm into both. And I'm doing the same thing now. I'm documenting how I feel and spitting it back out at people but I'm turning it into something I have control over. Like putting it into a box that I can carry around. I'll open it and share it and experience it with others. This has always gave me a feeling of power. It's a love for entertaining and influencing. A way to be recognized as doing something maybe not everyone could (or wanted) to do."

"And as a teen, the ability to play instruments was unique but it was even more unique to write your own music. I mean it still is, but now it's easier for people to invest little money and try something or play around with something because the physical tools are easy to obtain. You can create art and music with inexpensive equipment, home computers, our phones, whatever. But that doesn't make everyone with that equipment a creative or talented person. And we all know that..."

"...That is happening with all art forms."