Zach Shipps thrives when he’s spinning plates.  He’s got a baby on the way while he’s finishing up production and mixing work on a half-dozen recording projects with a wide range of local music acts. He’s also uprooting his main studio space in Birmingham and shifting down to Ferndale while also still acclimating to a life-away-from a rigorous touring and recording schedule, having recently ended his long tenure in Detroit-based synth-rock icons The Electric Six.

“At one point, I realized I hadn’t had a day off in four years,” Shipps recalls. The end of 2010 wrapped a whirlwind of production for the metro-area native, recording, mixing, mastering and even doing art layouts and promo for four full length Electric Six albums in the small breaks provided between the band’s more than 500 scheduled tour dates during that span.

“But I’m fine now,” he says with a light laugh, looking back at how ludicrous his daily life had become. He’s definitely still keeping busy.

Lettercamp features Liz Wittman, a veteran of Detroit’s post-2000 indie-pop scene, belting her high wispy voice as lead vocalist while Shipps settled in as the band’s drummer (and in-house engineer) more than one year ago. Lettercamp haven’t performed live lately, Shipps says, but “that’s because Liz and I are having a baby in the spring. It’s crazy wonderful. And in the summer, we’ll have an album-baby.”

Shipps says he started “screwing around,” demoing himself in the early 90’s on a humble Yamaha 4-track. Certain his story is not unique, he confesses feeling “powerless in ‘the studio,’  with a clock ticking… and all those barriers between you and ‘the mix.’”

Shipps couldn’t accept that so many decisions were being made by a person who wasn’t involved with his music. Keenly sensing “the writing already on the wall” in 1997, he started messing around with digital recording. He grabbed the essentials (early Pro-Tools versions on Mac) and started recording other people for free. He learned a lot working with Ann Arbor-based engineer Geoff Michael (Big Sky) and from playing with Brendan Benson, during his stint as the Michigan-native’s guitarist in 2002-2003. Plus, his 20-year-policy of refusing to get rid of any accumulated equipment, “ever,” finds him bolstered, now, him “with a lot of shit.”

Touring 5 months out of the year with E6 meant his job options were limited. But with all this equipment (and an ever honing know-how in a studio, gaining confidence through his “Groundhog Day”-esque experiences of annually revolving recordings for the E6 and many other trusting Detroit musicians), he felt audio engineering was life’s logical path. “I like twiddling knobs… and I realized there were a lot of musicians and songwriters around me who were bad at twiddling knobs.”

“I’m very mechanical. I enjoy tweaking. At some point I started to get good at it. My goal has always been to create recording situations that weren’t like the early studio experiences I hated. And, maybe help people see some other angle that wasn’t obvious.”

“Some stuff I’m hands-on and super-involved in the creative process and other stuff I’m just engineering or mixing or mastering. I’ve never worked with anyone that I didn’t already at-least-kind-of know… I don’t have a flashing sign hanging on my door. But, also, this is a pretty close-knit and incestuous musical community.”

Familiarity leads to comfort, Shipps knows it, but also, potentially, sprouts spontaneity and a nuanced creativity bubbled from that neighborly chemistry. “…or, inbreeding, I don’t know. It could go other ways too.”

Recording, inevitably, is “trial and error,” at least for Shipps, he admits. Know your equipment. Trust your ears. And…  “…don’t be afraid to do something that sounds shitty or pokes-out in a weird way. Embrace the shitty… Saying all that, though, makes it sound like I know what I’m doing, which, really, I don’t…  But I’m dug into this now. I wouldn’t go back; I love doing this.”

Christopher Tait ("Nucleus") has been working with Shipps his entire adult-musical life. Somehow, they've  managed to keep their live- and studio- collaborations as two separate worlds, to their benefit. "I have a particular method of putting arrangements together," the Belle Ghoul singer/keyboardist said. "And its due to that format and our familiarity, that he and I work very quickly together."

Tait said that his longtime (and now former E6-ally) has "...always been helpful with ideas when recording original material, and he's very, very good in the world of remixing. He just knows which sounds/samples work together.  It goes without saying that it helps to have such a multi-faceted musician there when I'm flopping...particularly on guitar, 'cuz what is in my head and what comes out are often two different things."


Says Tait: "... the years in which I've worked with him are a testament to what I think of him as an engineer/producer/musician.


The Electric Six (still featuring Tait), perform the Blind Pig in Ann Arbor next Thursday night, but Shipps will be off spinning plates. Freedom from E6 has fostered him packed roster of clientele (including local rapper EsQuire, Toledo’s synthy-rock duo Silent Lions). There’s also been a bit more time for him to experiment with composing and licensing arrangements for TV spots.

And then there’s the baby. “I like keeping those plates in the air,” Shipps said. “But now I know better. Like, when to stop working and walk around the block. I make lots of lists, also, on little pieces of paper.”

Shipps on Lettercamp: “We tried to go for bold strokes. Lots of electronic sounds obviously, but anything that makes noise got used. There's a song where Panic (Gerald Roesser) is playing a bicycle pump through a piece of aluminum gutter, for fucksake. There's cool textures and vocal parts. Sometimes there's drums, sometimes no drums. Sometimes there is even an "electric guitar.”

Shipss on Belle Ghoul: “The best band that was never on Creation Records. (Christopher) Tait's an interesting songwriter, really great with melody and layering. We've got a process now, after almost 10 years of working together, where he brings in these heavily-arranged laptop sessions and we systematically replace the tracks with other stuff, percussion, hand jive, moog, spoons, what-have-you.” 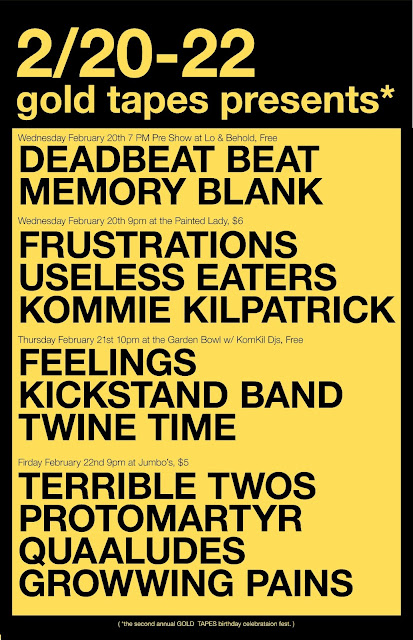