I've cobbled together three new videos from this past week and it seems they share a Monster theme.

Toledo's Silent Lions are synth-spilled indie-blues that chart the wobbly-est grooves while still keeping things chugging along the rawk-rails... and they've got a bit of a zombie-terror trope spilling over them as they perform in what seems to be a haunted house.

And then... thee inimitable Thee Oh Sees are showcasing their own endearingly lo-fi stumbled-grace in filmmaking as they go a bit orchestral for their Minotaur ballad.

May Looks Good To Me

Spring is coming...
And...- new music from Saturday Looks Good To Me
Posted by jeff milo at 12:30 AM No comments:

So what do you guys wanna talk about?

"...and a good megaphone-morning to you, sir!"
sincerely-
Congress 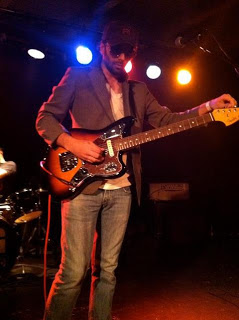 
MEANWHILE - Detroit X Detroit III goes down the following weekend (4/20/13 at the Magic Stick ) - - (Read more on this event in the April print edition of  iSpy Magazine  (main site).

Imitation is the sincerest form of flattery, right?

Detroit X Detroit is a whirled display of camaraderie through a whole bunch of Detroit-area bands covering each other’s songs. But, perhaps this could also stoke a healthy elbowing of one-upmanship, thereby challenging each “contender” in “the ring” to take their indie-rock games to up to the next level.

These geographic-self-celebrations started two years ago, created and curated by Melissa Rowe, (marketing specialist and and local-music-lover (both of the “modern” and “classical” scenes). Bands signed up a while ago, excitedly selecting which fairly-recent / currently-active local act they’d impersonate in song (and, often, in appearance).

The School of Rock students will open things up, joining in the spirit of things by covering one of their teacher's bands. Hip In Detroit will play EmCee for the festivities. The cover charge funds a special scholarship at of

The winter is ending, despite the insipid snow-globe flaked view from our windows. And all the players are back in town from their respective SXSW jaunts. Hopefully they've rested up by now...

Sample some sounds from Duende... a track that'll be featured in a forthcoming documentary on modern day folk-hero/felon, Colton Harris Moore - a.k.a. 'The Barefoot Bandit.'

Branding is such a loaded term when it comes to .

This is the Three, the birthplace of the Motown Sound, and its manufacturing industry served as The Arsenal of Democracy during WWII.

’s "definition," (its brand) is so splintered that its become indefinable –


And, that especially goes for its crop of creative musicians and the fill-in-the-blank-styles they’re been re-inventing.

We don’t exactly know what we’re most known for, if it’s as the birthplace of Garage Rock (Stooges / MC5) or the birthplace of Techno (The Belleville 3), and, thus, inherent to the panicky, future-shock-tinged head-scratching of our “post-everything” generation, our contemporary class of music-makers vacillate between preserving the lineages laid-down or tossing it all out the back door and making something  anew, all our own.

Starting the next cultural chapter (or, perhaps, an entirely new story, altogether)  is expected to be daunting. More than thirty-years since the activation of the music world’s very first Techno pioneers, a new generation of Millennials switched-on and this early Spring hears them sounding as though they’ve transformed into…...what?

Bands like Lord Scrummage, Deastro, Jamaican Queens and Phantasmagoria might not yet be well known outside of this mitten-shaped state yet, but they each exemplify this beautifully un-brand-able erratic blending of styles that I'm trying to touch-upon...

What links them all, maybe, is their laptops. Their samplers, their sequencers, their pitch-shifting, cross-fading, beatmixing operating systems, -employed creatively between them (and countless others in Detroit’s modern universe of underground talents on display through various basement/loft/storefront-performances,) marking their signature sound, each re-writing, re-working or re-inventing their own “electro-pop.” Or what we've tried to call EDM (Electronic-Dance-Music). Only muddied with distinct, but understated spicing -from rap, from drone/noise/ambient, from psychedelically-informed folk. It all wobbles down together...into this ... Whaddya' wanna call it?

Or, maybe call it “post-techno.” Or, maybe there’s a less anticlimactic way, a phrase to strike, to hem thse groups displaying sensibilities for hip-hop, ambient drone, Top 40 pop-hooks and ambitiously layered electro-rock compositions into a one or two-word phrase, something catchy, a brand.

Lord Scrummage are a quartet blending funk, soul and R&B to a defiant/dashing trash-pop aesthetic. Sweetened by soothing, syrupy backing female vocals, this irreverent, vaudevillian rapper-cribbing, funk-ish warble relays debaucheries from the darker sides of town. Much of the group work together (and sometimes host live performances) in a Deli under the shadow of the GM Renaissance Center. They recently released their 2nd full length album, Triangle or Die and their next project finds them collaborating with an up-and-coming emcee called SheefyMcFly.

Anyway, we can’t say if either Scrummage or Sheefy are at the center, or any center of some new movement, or brand, but both have demonstrated notable dedication towards a trend of community-girding showcasing events. The artists behind Lord Scrummage made their name, locally, over the last three years by hosting floating, word-of-mouth, after-hours loft parties, often in abandoned/re-purposed factory-spaces refitted with pulsing, crackling PA systems. Sheefy McFly hosts his own monthly hip-hop series called “The Air Up There,” where up ten emcees or rap-groups gather with a somewhat Battle-mentality, after-hours in a shoe store on Woodward Avenue.

The lighting is dim and maybe the soundsystems aren’t perfect every time. It’s often BYOB and you’re lucky to find parking.

But this is the refresh, the re-start, the primal first dance-steps of a new chorus of talents trying out their own take on___? Techno? Ambient? Spaced-out funk/rock?

Some members of Lord Scrummage, meanwhile, recently took part in an “Ambient Battle” at the ever-edifying artist's collective-space in North End Studios  – a round robin-designed concert tournament, pitting together electro-centric composers improvising inside the stylistic realm of airier, detached and dreamy songscapes. Many of the bands involved, expectedly, ran the gamut and defied easy categorization; some were merely just trying out “ambient” on a whim!

But what’s ambient? That was up for interpretation that night And so’s ’s new class of electronic artists. Southern-rap snark or warm acoustic atmospherics, darkly droning noise or sweetened synth-pop meditations, it’s all happening on the newest albums from these bands, often within the same 4-minute song. 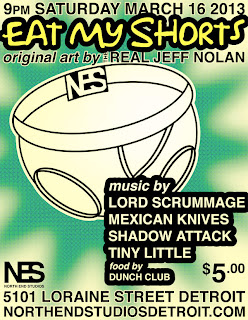 Up next at NES--
Lord Scrummage - Mexican Knives - Shadow Attack and Tiny Little provide a swirling soundtrack for a special art installation/exhibit featuring a series of larger than life paintings inspired by Facebook advertisements and a certain post modern cartoon
.

Regarding the other two bands name-dropped above: 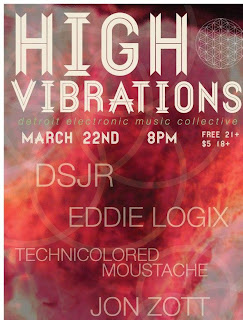 Phantasmagoria's beatmixing, loopmaster Christopher Jarvis is hosting another round of his newly commenced ambient music showcase -
Young Mr. Jarvis has two respective presentations of new musical projects - one being his solo album under the moniker:
Ancient Language
Listen: MODERN BABBLE

...the other being a new single with his group/duo (with singer/percussionist Lianna Vanicelli) -Phantasmagoria's "Sapphire" (LISTEN -...with subsequent remixing
by the already noted Lord Scrummage) 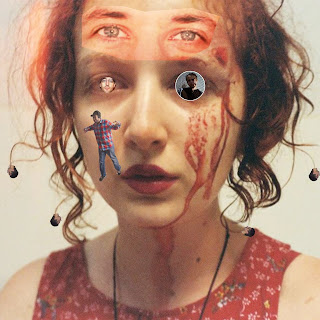 And as soon as Jamaican Queens return from SXSW...and hopefully get some rest (or at least some upkicks of Vitamin C), they'll be bringing their strange, alluring hybrids of post-Trap, neo-wub, hip-hopped art-pop (...Jesus, what the hell did I just write...?) to this likely loud, electro-heavy affair commemorating the proper release of their debut album wormfood. -Hosted at yet-another uncategorize-able Art Space/Collective/String-of-DIY-storefronts - known as Trinosophes


Call it what you will...
That's all for now

Spring Training would have started this week.

By that, I mean The Blowout... The week when, normally, our bodies are usually gearing up for treacherous traversing of Hamtramck's icy back-roads, flanked with parking on both sides of those one-way streets; our Converse-footed cavalcades nervously checking their smartphone clocks and their uploaded schedule preferences to make sure they see who they want to see, make sure they get from one side of town to the other, in time...


But hold off. Settle back down. Those invigorating, giddy, disorienting stresses shant be rattling through you until the end of April, now.

But, characteristic to Detroit, there's no dearth of decent, dynamic and straight-up disordered concert-type ceremonies trundling the undergrounds, basements & storefronts... or sashaying under shinier lights with sweeter soundsystems in the bigger theatres.

It's only a matter of time... Blowout will be "back" but bigger... That much is for sure. Not that I need to spin off on some flowery dissertation celebrating, with healthy spatulas of sentimental/philosophical scenesterisms - We had enough of that on this blog in 2010.

Let's look to the very near future: 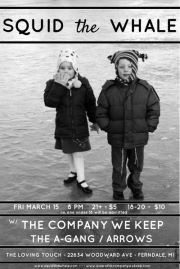 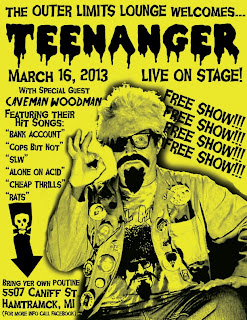 Sheefy and Scrummage - The Air Up There

Sheefy McFly's known for making raw, irreverent raps and somewhat bold statements. Bold--not merely through his licentious, quick-cutting rhymes or those swampy synths and bombastic beats he employs in his wavy-wayward jams, but, bold, also in self-assessment.

"This album is the epitome of unique and fearless creation."

But then, consider that this sneered-spaced-out provocateur of a funked-with/fucked-with/dark-ishly, dirt-decorated rap is speaking about his on/off year's-long collaboration with an equally oddball bunch of eclectic and experimental music-types such: Lord Scrummage

That inevitably genre-defiant recipe, in itself, could be enough to entice -at-least- the avant-artsy-indie-camps over to the fire. Come, sit...and hear the surrealist stories of locally-bred far-out disco-funk and disarmingly keen (if downplayed) sensibilities for soulful R&B, bubbling under raps that take the snarky Sheefy into "another realm."

"Of course, I'm still talking about my regular 'drugs-and-women,'" says Sheefy, "but some tracks here, with Scrummage's instrumentals, lead me to get a lot of things off my chest that I always think about but haven't rapped about-yet; definitely a turning point for me as an artist."

Sheefy's hosted a monthly local hip hop showcase at Bob's Classic Kicks for three years now called The Air Up There. March 30th's TAUT edition will welcome Lord Scrummage to the stage to commemorate the release of their album Smoking Triangles.

The avant-garde art-pop collective has found a kindred spirit in the rapper, with a particular creative bond blossoming between Scrummage lead singer Alex Lauer and Mr. McFly.

"We definitely rubbed off on one another and that was another reason why we collaborated," says Sheefy. "We were each so intrigued by each others sounds and movements that we wanted to learn and grow with each other to make something that has never been done before."

And they "did it all in Corktown ! A good ole Detroit classic album!" Lauer and McFly met on the scene but got to know each other proper through their day-jobs at Nathan's Deli. "Mixing is being done by my engineer DonnieTAUT, who finalizes all of my music and I can say to the listeners out there, that they haven't heard anything like this before."

"We set the creative and unique bar with this one. It is absolutely more than a album."
Kinda makes you wanna at least hear some of it though, right? Psychedelic synth-centric scribblers getting down to a beautifully-trashy funk groove under quintessentially raw, underground-reverent rap globs.

If anything - swing over to The Air Up There, something our bold hero is hoping to build towards being "the most prominent hip-hop/music-summit in Detroit," or maybe in "all of Michigan...(probably the world!)."

Scrummage will perform, along with the rock-outfit that backs Sheefy -known as The Delorean.
~
The adhoc album art featured above is just another facet of McFly & Scrummage's collaboration - featuring the latter (band's) "mascot" (a cartoon image of Lauer's real-life pet) Clyde Moop. You could see a potential art show / exhibition come of this, with Sheefy illustrating the mad visions of Scrummage's Lauer and Conor Edwards.

So then... This young rapper (think Danny Brown by way of Rick James, with a penchant for Too Short) is set to host yet another fine hip-hop showcase. Introduce yourself.

And Scrummage?
They recently released their 2nd proper full length album: Triangle Or Die (with lead single "Honey" featuring none other than Sheefy).

They were also spotlighted by the Sundance Channel's new music documentary: