Back Into The (Pop) Workforce 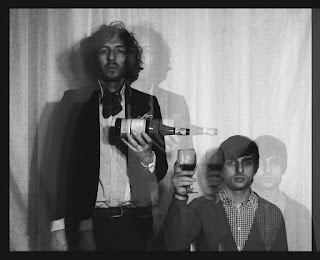 Casimer Pascal - glorious balladeer of the ignored, composer of elegant and dazzling chamber-pop parades, assures us that-  -though his beloved band of classy experimentalists and radiant pop-deconstrucionists, Pas/Cal, have, themselves, deconstructed and disbanded, and though he's singing songs about feeling retired, - -the good time will come, yet.

Three songs into his newest venture with nephew Vincent Casimir, it seems that, though Detroit lost him to Chicago three years ago, old friends can take heart that our still-appreciated satellite west of that westerly Great Lake is, you might say, at it again and hitting a stride.

Leaving behind the surrealist sun-rays and day-dreamy acoustic-based pop cascades of his (as of yet-) piece de resistance, I Was Raised On Mattew, Mark, Luke and Laura, this pair drifts and ponderously orbits through a blend of funky dance-pop and fuzzy synth's coo as welcomed as the cleansing, delicate plod of an early spring's foggy mist, dew drops at your earlobes and the evocative dryness at the back of your throat as you drink in these sublime lyrical ruminations on wine and curious metaphorical musings on the travails of parenthood.  {click here to dig the cover art by former Pas/Cal-ian and current Berlin Zookeeper Trevor Naud).

Intriguing and welcomed... We'll see (and hear) what happens next, I suppose.

~~~ }{ ~~~
While you're still here...
Let me just proclaim a little thing on local music...
800-Beloved songwriter Sean Lynch made one of my favorite locally and/or - Detroit-based albums of, well, potentially the last decade, if not last-5-years - Everything Purple. Well, now, heck - probably just one of my favorite albums - let's leave local out of it.


But, then... there might be some sort of resurrection, or, evolution, what-have-you... No body knows for sure. 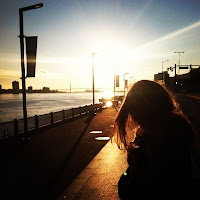 
"I...am..."
...there's a hushed accentuation  upon that second word, breathy, but still noticeable, anyway, considering how soft-spoken he normally is when he's away from stages or recording booths and not warbling his high Numan-esque/Mothersbaughian singing voice over increasingly rock-driven guitars via his band,  K.I.D.S.

"It's not really the same old faces anymore...
...Granted, many of those bands are people that we do know and some of it are their new projects, but, I feel like we're on a full re-cycle now, basically. It feels good."

Acevedo reset his own musical modus-operandi last May when Beehive Recording Company started streaming a digi-EP of jangly, fuzzed-out, minimalist pop songs that ushered in the next band-centric chapter of his life (now, coming on about 18-months or so since the break-up of the locally and just-on-the-cusp-of-nationally-notable group Silverghost).

K.I.D.S. solidified with bassist Nick Jones, drummer Don Blum and guitarist Scott Stimic, joining Acevedo in the summer 2011 - taking what may have started out as electro-friendly, echo-friendly, new-wave dabbling space-pop and whittled it, all rough-and-tumbly- into more of a straight rock n' roll charge.

And things are re-setting all over...
...Not only is former-Scarlet Oaks strummer Steve McCauley unveiling his new band (The Walking Beat), but former Ghost City shoegazer (and current Electric Six keyboardist) TAIT is debuting his new project with Jesse Paris Smith, Belle Ghoul...

All three of those bands play Blowout's Pre-Party, Wednesday, Feb 29th - at the Magic Stick (--which is where most of us musicheads will be getting our festival wrist-bands).

Acevedo's re-fresh mirrors that of singer/songwriter Scott Masson of GLOSSIES... (who, himself, had a bit of an ugly break-up with the label he'd signed with heading his main band, OFFICE. Masson, like Acevedo, went into a bit of a hermit mode (...actually, perhaps way more so than Acevedo), and stepped back from the scene after the demise of OFFICE, squirreled away in a basement wherein he started marvelous, mad, whimsical and just flat-out weird song experiments that would eventually be jigsawed together to become GLOSSIES' debut, Phantom Films.


And then, GLOSSIES, like K.I.D.S., was eventually rounded out by a full backing group, including drummer Jeff Supina, bassist Fabian Halabou and guitarist Kip Donlon.

Well, then, yes... That will happen. No sure date yet...but stay tuned.

"I'm happy where K.I.D.S. is at...I kinda wanted to start a rock band..." He nods to the likelihood that audiences who saw the group's first big shows, like Dally in the Alley, were encountering things, sounds, volumes, that weren't present on the initial Beehive demos. "And that's what I wanted," said Acevedo, who brings song-skeletons in and lets these players, whom he trusts, make up their own parts from there. "Just....to see what happens. I never wanted to tell anyone exactly how to play the song..."

It's not the DeLeano-Acevedo Band...beyond that, the band, (K.I.D.S.), an ever-shifting acronym, almost doesn't even, technically, have a concrete name, in that regard. Self-effacing to a T...

Masson, likewise, has seen his collaborators start working out their own parts for GLOSSIES' newest track.

Acevedo's got some solo stuff streaming out there - the result of a mad-spell of songwriting he fell into at the end of November that hasn't let up until just last week. He now has three EP's worth of material - the first of which is out in form of a 15-minute / 4-song / sample-dotted / synth-heavy dream-pop odyssey ...a bit of a "mix-tape," if you will - in SoundCloud form and a decent taste of what's to come, as he hopes to develop a live set and put some more of these recordings out later next month.

The guy's got a rock band now, yeah, -but he still can't quell that love for electronic music - the evolution of his Silverghost-ian sensibilities.

And what kinds of other evolutions will local audiences discover...

Phantasmagoria has an album coming out... So do the HandGrenades... What's Future Slang all about, anyhow... and what about Oblisk?

happy blowout
Posted by jeff milo at 1:30 PM No comments:

This and That That


Mister - That that from TONY KATAI on Vimeo.


The year does not begin until Blowout - I feel like so many more lights seem to turn on in the aftermath - the anecdotes of who really hit it start getting around and these hyperbolic blogs (guilty) start chiming and echoing and hyping... 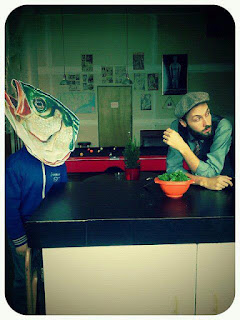 Mister grabbed our (or at least my) attention back at Blowout 2010... Months after that show, before 2011 happened, before he formed Passalacqua, he told me about an EP he was working on titled Cookin' With Que-C (a recipe-cookbook themed collection of the raps he'd been developing (with the producer-named-in-the-title) in his seminal years back on the Detroit scene, 05-06, when he returned home from his time in Maryland).

Well, two years later, after the fierce local flair of Passalacqua (they've gotten to the point where they're solid candidates to open for Lupe Fiasco in April, and maybe even Shabazz Palaces, sheesh), now, Lacker's found some time to get back to that work desk, to finish the slowly-assembled jigsaw tracks of his solo-endeavors and, over the weekend, filmed a video for the the single "That That" (from a previous production with Dr. B).  -Viewable above, dir. Tony Katai).

After a whirlwind two years toeing the shores of both Detroit's hip-hop and indie crowds, (somehow succeeding to charm that batch that rapper Ben Miles dubbed "the hipster-crowd...") he's come to a sobering perspective, he's...potentially, calming down.


"With rap, it's always this thing: like, I gotta put out more stuff. There's this bloggy kinda, not-a-competition, but kinda-competition - if you see Sheefy on Pitchfork, it's like - how'd he get on Pitchfork? Now I wanna get on Pitchfork....that thing where you have to one-up somebody, somehow!"


But he's come to realize that the crowd finds the sounds they want, in the end...that, at the end of the day, all one can do, is get back to the work, to the writing, to the raps.


"People who like (Mister) aren't going to be the one who like Sheefy's stuff, necessarily, and then vice versa... A lot of rappers and rock bands, even, are vying for the same fans, but you've got to find who you appeal to, and I'm finally getting to that..."


Right... just because Blaksmith's in Cold Men Young, that doesn't guarantee that CMY fans are gonna be into Passalacqua...

But if Miles is looking for a varied crowd, (with some hipsters, likely) to come out for the album release show headlined by the funk/indie-rock/rap-hybrid septet Of Mice and Musicians - (of which he is one member) then it's likely he'll be pleased if he invites -Passalacqua, along with House Phone and Detroit CYDI... (look for that in early April).


"But, from a rapper's perspective? Like, how do you get on those blogs? Is it luck or just sheer amount of content... You really just gotta grin and bear it and work on the next thing...For us, word of mouth seems to be working so far."


And it's great that now, through Passalacqua, that Lackner's got some attention - he can unload all his solo-stuff now, with fortunate reserves of momentum. Sort of an, oh-by-the-way...since-you-haven't-heard-this-yet...be it 2, 3 or 4 years old, what-have-you, it's still yet-to-be-released...


"I've got five years of work that has to all come out and people will think that's crazy, but, no, it's crazy that I haven't released it yet. It just happened to work out this way.

Mister has two more EPs coming together, one more substantially/assuredly than the other... We'll have to stay tuned.


Hiroshima from Alec on Vimeo.