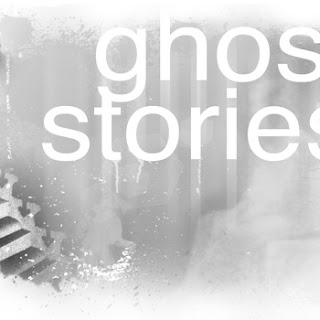 I had meant to write about this before/upon Halloween.

About a year ago, Ben Collins (Lighting Love, Hounds Below) leafed through libraries and trolled the tall tales of Michigan's haunted history to mine narrative material for his solo songwriting project.
A very subtle synth adds a bass' atmospheric bellow in the backgrounds and drums are only prominent on the opening track, "Detroit River" (listen here), but the arrangements are given enough character from Collin's mid-high wispy vocals (finding the middle ground between Elliott Smith's ache and Sufjan Steven's lullaby) and sparse, august acoustic guitar plodding along like the just-noticeable pat of an autumn's overcast rain. Though the bulk of it is gray hazy folk, each song reaches pinnacles of warming crescendos and simultaenously can stand alone quite well with their own unique aesthetics (characters and sentiments).
Listen:
Posted by jeff milo at 12:24 PM