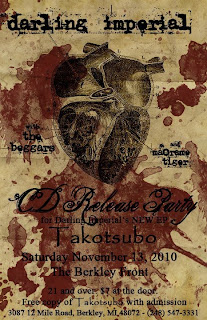 Darling Imperial make pop/rock with a bit of a caustic cut to it. Their last record (09's I Know Everyone You Know) negotiated the potential evolutions of garage rock into a more melodious, less-stumbling sort of drive - while mixing in plenty of psychedelic pedal fuzz and an almost new-wave sort of swaggering groove.
Takosubo retains the chemistry and tightness of their compositions - arresting rhythms and snaring riffs continue to set a steady punch of jangly all-shook-up-ness ("100xSpun"). This time around, working with Jon Weier, they flesh out some more bluesy material (the shimmying march and fiery guitar howls of "You Told Me") that reveals a sensibility for delegating atmospheric sparseness and shambolic, riff-roar-the-walls-down crescendos. Sutured throughout the EP are those striking displays of dueling guitars and soulful vocals, the former coming off like a raucous waltz between psyche-shredded space rock and growling, blues garage, the latter balancing a more delicate, indie-rock air with a stop-you-in-your-tracks belt that stands and struts right alongside all this hard rock rousing.

Their joined by Macrame Tiger and the Beggars to celebrate the release of said-EP, 11/13 - at the Berkley Front.
Posted by jeff milo at 6:23 AM