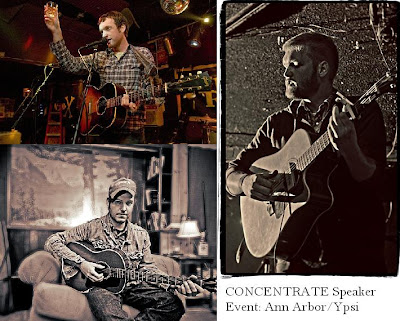 --That's a word that can make many cringe due to it’s perception for creating cliques, catty competitiveness and its inherent risk of disillusionment or jadedness upon once wide-eyed hopeful artists
-- It’s also a word that makes some think of community, to believe in their friends and gain inspiration from the works, and the performances, of their neighbors.

Scenes can stir up pride for one’s community – to know and appreciate that such talent is nestled throughout basements and 2nd story lofts all within a walking distance (or a quick bus ride) from the venue.

Scenes, the scene, or a scene, ...can be the elephant in the room of any live music event – at least it is for me, -someone who has to write about it constantly. Whether it’s the Ypsi Music Shelf inside Café Ollie, or if it’s the Ypsi Flea festival, if it’s an up and coming Ann Arbor rock group self-releasing their self-produced album on a Thursday night at the Blind Pig – whether it’s an esteemed folk band headlining a Saturday at the Ark or if it’s something like the expansive Mittenfest music festival, which will be here in just two months time…

A voice in the back of my head always asks – what does this mean for the scene, where or what can this lead to, or become? What are we trying to build, if anything at all, -or are we just crazy, crazy passionate and merely doing it because we can’t help it (or explain it)?

Concentrate Magazine has wondered something similar – how do we sustain it, to the point where it keeps growing, as opposed to blooming to a certain point, how do we get the branches of our tree to peak up above the canopy of all the other city’s scenes – is that the tacit goal? What does it require? Is it wide-eyed, naïve, unreasonable or egotistical to overtly acknowledge the worth of each other’s work to the point where we enter realms of analyzing and acting upon required steps that are more commerce than art, more self-marketing than self-expression?