It's That Time of Year

I'm off for the week folks...headed out to Portland... I'll be back Tuesday - here's a quick on-the-fly interview concerning my favorite time of year with one of my favorite local characters: 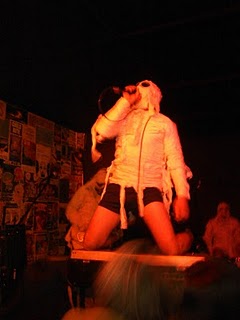 A few words from local songwriter/sparkplug/one-man-audience and music-enthusiast Frank Woodman, concerning the crazy, curious and inspiring energy that radiates throughout the Detroit's rock clubs as Halloween gets closer and closer...

See: Zombie Dance Party 8 -at the Loving Touch - Oct 25 (part of the "Tuesdays in the Forest" DJ series and featuring: "Living, breathing performances by The Beggars & "The Monks"..."

"I think the music "scene" and it's players are first and foremost huge music fans and what could be more fun than "dressing up" as your heroes?" said Woodman.

"Collecting candy dressed as Superman has turned into donning David Bowie's Ziggy Stardust outfit for the pure joy of it. "Whatcha' got cooking for Halloween?" starts in August now, with bands thinking about their cover band year round. " It's really exciting to step away from your own band a bit and try something new."

"'This year we should do this band!' is the battle cry."

Woodman, along with John Szymanski (of the Hentchmen), Alex Glendenning (of Dead Beat Beat) and T.J. Gretch - have performed three straight years' of Zombie shows where they've interpretted three different punk rock icons - from the Sonics, to the Cramps, to -(shown above^), the Mummies.


"So, 4 years into this, it's more exciting than ever. We're welcoming a newbie this year: Jake Culkowski from The Detroit Cobras, Magic Jake and the Power Crystals and Sugarcoats will be joining myself, John Hentch, Alex Deadbeat and TJ Grech for The Fake Monks.

The Monks, Woodman noted, will be an interesting challenge - distinguished for their exacting musicality and thus a considerable stretch away from the notoriously sloppier or chaotic bands they'd covered in the past.

Theatre Bizarre - the local psychedelic performance-art troupe aims to open up a portal inside the Masonic Temple - come get initiated (on Oct 22nd)! Costumes mandatory!

Mister as BECK
Liz, Regan, Dina and Jen as THE SHIRELLES
Fawn as BLONDIE
Wilson as AC/DC
ChildBite as NINE INCH NAILS
Bahamut as WHITE ZOMBIE
Oblisk as JOY DIVISION
Jesse and the Gnome as RADIOHEAD
The Marvins as STONE TEMPLE PILOTS
Marble Fauns as ABBA
Man Halen as VAN HALEN
Brent “Black Smith” as JAY-Z
Creepy Crawlers as INSANE CLOWN POSSE
Pupils as BJORK
Citizen Smile as U2
Brain Stew as GREEN DAY
Woodman as THE MONKS
Golden Torso as IGGY & THE STOOGES
Pink Lightning as MICHAEL JACKSON
~~ 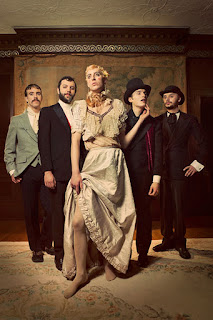 And if all that's not enough - Prussia's Single Barrel Detroit-produced-music-video, "What Am I Gonna Tell Your Mom?" went live this week via Impose Magazine.
More info here.

OH, but of course...
The Urban Harvest Night! -presented by the Royal Oak Community Farm - That's this weekend Oct 8th at Royal Oak Farmer's Market (5pm - 11pm) "...a great night out while giving back to the community" 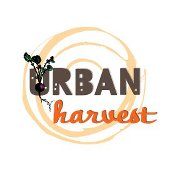 
Activities for kids (some of which might involve pumpkins) and spirits to sip for the adults: like Bell's Octoberfest and spiked cider