Two hours after landing in Portland, I was swept up into a happy horde of buoyed blue-collars, neo-hippies, graying free-spirits and anyone else awake enough to know that the way things' are goin just don't feel right...

Rain coats and wind-breakers wrapped an animated and exlcamatory assemblage strolling across the tracks meant for that hip-town's light-rail train transports, enveloping my red-knit cap with their cardboard signs, their voices ("They Got Bailed Out, We Got Sold Out") echoing off the buildings in the city center, on their way to fill up Pioneer Park; their shoulders sardine'd, their feet stomping together, their voices expressing an amalgam of disagreements and flares of general fed-up-ness. The crowds reached up to 5,000, so the Internet tells me.

The 99%... Such a swift stroke to join the upper-middles to the lower-lowers, the Unions to the Communes, the Dutch Colonials to the Condominiums to the Couch Surfers - no longer a side to be on, but a round, encompassing pie "piece," a PacMan shaped piece, biting and spewing-out that 1%-sized sliver.

And to think that it was happening in two dozen other cities - more so. Until three or so weeks ago, back before the Mace-sprayed-round-the-country, this was a comparably modest mustering focused only at/on Wall Street in New York.

Now, it's going to be everywhere - including Detroit, next Friday. Lansing and Ann Arbor will also be "occupied..." Find your invites, your info and your where's and what's on Facebook.

And maybe it's hyperbole, but... as Reuters put it up: "Wall Street action part of global "Arab Spring"?"

~
In any case... Having gotten back into town today laced with this "mad-as-hell"-esque motivation, my musican sensibilities have leaned towards styles exemplary of similar angst, detraction and communnal edification:
folk and punk...

Not that I'm not self-conscious about whittling certain bands, be they Kommie Kilpatrick or Jacuzzi Boys to just one guttural bark of a cliched word - punk... But you can at least get a picture of what I mean - the energy. Rock n' roll has always been about reckless abandon, sex, drugs, fast-dancing and head-banging. Indie-rock can be too maudlin. Punk was born by upstarts who didn't quite know where they were going, why they were stampeding their foreheads straight against the wall or exactly who they needed to talk to, specifically, to get their grievances answered - sorta like some of the people I stood with, in Portland.

But perhaps, its that encouraging to merely see such action...  And, perhaps it's trite for me to go wondering, all bright-eyed about it, what role our music community can play... Will Detroit or Ypsi locals, be they psycher's, folksters or punkers hop into the backs of flat-bed trucks ala Tom Morello's "Nightwatchman" or even further back off on some deluded Dylan trip...

And maybe it's even more trite to remark, again, (as any blog would) upon the reach, the connective capabilities of the Facebook... the double edged sword, somehow both a profound resource and a perfidious diversion...

Still yet, Facebook has, in some small way, supplanted the back-of-the-bar as the premier source of band-to-band/musician-to-musician networking - most often it's between facebook-messaging where most side-projects and next-new-things are born...

So what else can all these connected-bands do, besides right new songs together and organize just another ol' Saturday show?
How best to occupy...our time...our connectedness...


Anyway...
Here's some things to see:


Twine Time, meanwhile, feature one member of Kommie Kilpatrick, a quintet that revives the elbows-up-esque punk tornadoisms of the seminal hardcore era, who, by the way, are hosting a house-party show that same day... down on Commonwealth in Woodbridge (more info here), --Also playing that early evening (4:30-ish) is Deadbeat Beat (-which, subsequently, features another member of Twine Time), but also: Rall Tide, and some out-of-towners, Ypsi's Bad Indians and one out-of-stater: Colleen Green (<--stream the latter's EP "Cujo" here.

And then that leads into that evening's Magic Stick show featuring national punk-esque lo-fi-pop sensations the Dum Dum Girls. 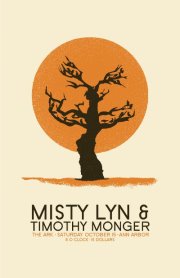 And...since I did mention folk - one couldn't go wrong with this pairing: Misty Lyn & the Big Beautiful with Timothy Monger - Saturday at Ann Arbor Folk foundry, the Ark.

And on a final note...
if I'm on a rant about energy - then I have to mention Scottie Stone - a veritable machine of a drummer fueled by a heart of gold that's all too eager to remind you about how lucky, with the musical community, that we have, here...

It's the dude's birthday - he plays with Dutch Pink, who joins Macrame Tiger and String of Ponies at the Berkley Front on Friday night.
Posted by jeff milo at 8:16 PM