"We are too ethnic to look anything like them... so we will just do what we can to pull off the look."

Asim Akhtar knows that his band, Oblisk, bare a lot more brown skin then the pale Mancs they intend to mimic next Saturday at the Crofoot, that being the revered post-punk band Joy Division. 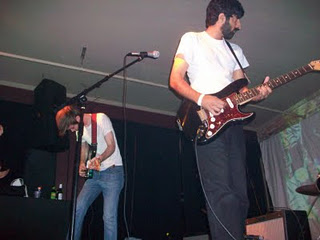 Halloween in Detroit means a lot of things. A lot of messy, beautiful, brutish things that could stretch the senses... For many it means an inherently auditory-based costume - a twist upon the threadbare escapade of cover songs - in Detroit it's taken further.

Here, just as likely in many music mecca's this time of year, the streets, the home studios, basement practice spots and eventual stages are flush with a crop of bands eager to embody iconic bands for an entire night's worth of material.

Forget if Akhtar looks anything like the wiggly crooner Ian Curtis - the make-up is the music. Though, "I will be shaving my beard," Akhtar reveals, "for the first time in four years...if that counts for anything."

"It's a strange concept," Akhtar said, diving into another persona, not just for a night, but in the nuanced scenario of singing their words / playing their notes. "The best part about it is that it feels like you are playing completely for the people. Emulating a band nobody has seen live...for the sake of good fun, for those who love Joy Division..."

Oblisk become Joy Division - Friday, 10/28 at the Crofoot - This is the Pontiac music barn's fourth consecutive year culling a 20-some-odd band bill's worth of musicians-as-other-musicians - You can hear Radiohead, Bjork and Beck, you can hear the Stooges. You can even hear Van Halen, The Monks and Michael Jackson. 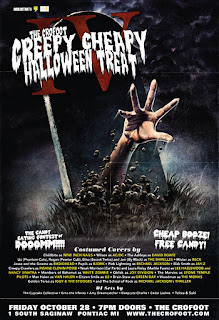 But hear them out.

Oblisk, meanwhile, are getting close to wrapping up their third LP, recorded with Chris Koltay. Listen to them here.
Posted by jeff milo at 4:22 PM